Saturday morning I wrote an entry here sounding (and feeling) inspired about just doing things instead of overplanning – not even realizing I was doing just that AT THAT VERY MOMENT.

I wake up early every morning regardless of need. Somehow I can’t seem to sleep much past 6:30 no matter what I do. In part I think it’s aging, but I suspect it’s also anticipation: a minor Christmas-morning like question in my head “Is it time for drinking coffee and relaxing?” And usually, if it’s after, say, 5:00 AM or so, the answer is yes.

Saturday was no exception. I woke up at about 6, started coffee, checked email and thought about what I would do that day. As it was a weekend, one obvious option is to go for a long bike ride. After all, we’ve got a series of about 10 of them coming up in a few weeks and it’d be good to be ready for that. As is usual, I looked at the weather for the morning. 70% Chance of showers, 5 mm rain possible in the morning, less chance later in the day. Then I saw there was a Eid / Canada Day celebration in our neighbourhood and the decision was made. If I’m ever caught in the rain without an umbrella, folks have described me as looking very cat like. I think this is a reasonable approximation: 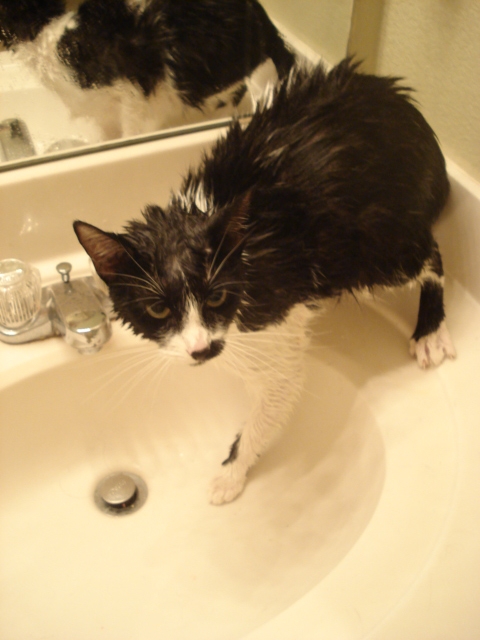 And so, I did some writing, made breakfast, and eventually went to the celebration which turned out to be a bit of a bust – more targeted at kids than adults. I went home really disappointed as by now half the day was over. I had no idea what I wanted to do but I wanted it to be interesting and different.  In the end I never came up with just the right thing but foolishly felt bad much of the rest of the day for wasting the day. Then felt further bad for wasting more of the day feeling bad about wasting the day. Eventually I grudgingly did a virtual ride in a place where there were no risks. It couldn’t rain, I could stop any time I wanted, I could have whatever music I liked, and if I got hungry I could have whatever food I desired. It was OK but I only did about 40 minutes before moving on.

In the end, after a shower that happened while I ate breakfast, there was no rain. And that was what made things click: I had written a story in my head about a hypothetical trip in which I went out, was rained on and miserable and came back swearing off riding ever again because of how horrible it all was. And that story was completely imaginary.  And so I made a decision then: If I want to ride and it’s not pouring outside and there’s no severe weather warning predicted, I go. My bike’s waterproof, I’m waterproof. There are no excuses. Any excuse I might come up regarding future events is a complete work of fiction.

And so I woke up Sunday morning intending to ride. And bonus! Daegan had managed to get the day off from work.  I looked at the forecast: 40% chance of thunderstorms. But I’d already made up my mind the day before and so after breakfast we hit the road heading north bound for Musselman’s Lake according to the route we found but in reality we were headed for Country Stop Burgers.  After a late start, we were on our way.

The first 2/3 of the way there was excellent. Daegan, 28 years my junior kept great pace on the route with very little training while I needed weeks of training to get to the same point.  But then it happened: About 10 km away from our destination, it started to sprinkle.

And it wasn’t that bad. In fact, as warm as I was, it was kind of refreshing. We got that off and on for about a half an hour before we arrived and received our reward.

We sat for about a half an hour before deciding it was time to head for home.  Except looking out the window we saw another challenge.

The clouds we had hoped would pass by us were only thickening with little end in sight.  Eventually we realized there really was no getting around it, we had to get going.  When we stepped outside we found that the temperature had already begun to drop, and within a few minutes of getting back on our bikes and starting the 3 hour or so ride home, the rain had started. But it was the refreshing, nice rain we’d had much of the morning and so we were happy. It didn’t take long, though, before the rain built up to a steady drizzle. And then the thunder started and we knew we would need to find shelter soon. Since we were simply retracing our steps home we knew of a couple of places. One was a farm stand about 2 minutes ahead of us. The second was a gas station about 3 minutes ahead. When we reached the farm stand it was raining a little harder but still manageable. We decided there would be more space to wait in at the gas station and pulled in there as the rain got bad enough to make us start to question if we shouldn’t have stopped at the farm stand after all.  Meanwhile we saw someone else headed out of the gas station parking lot with a can of gas. What a time to run out of gas!

Once we were under the awning of gas station we knew we’d made the right choice.  Daegan ran inside to get us a couple of coffees and we sat and watched the rain come down and the parking lot flood.

And pour it did.  We relaxed under the awning and wondered if the area around the pumps was going to end up flooding as well – it never did) and watched the few other folks who had decided to stop there and wait out the storm in their cars.  A few minutes in, an SUV pulled in and started filling up. As the driver filled up the car, the passenger came over and chatted with us remarking that we’d lucked out finding this spot to wait out the storm. As it turned out her husband, filling the car up right then, was the guy who had run out of gas. It was her birthday and she was laughing at the absurdity of running out of gas on her birthday. Taking it as a sign she decided that instead of going out for dinner she was going to relax at home and BBQ some shrimp for her birthday instead.

The ride home after that was lovely and fast. The 650+ metres of climbing we had done to get there paid off as we rolled quickly downhill and back home under sunny skies, stopping only once to grab a cold drink.

Having those two experiences two days apart was really a great lesson for me. In one I made up a reason why an experience that mostly sounded fun would probably not be and talked myself out of it. In the second, I not only ignored the made up story in my head about what would happen, the big event I was trying to avoid actually did happen and it turned out to be one of the more fun and adventurous parts of the trip.

It’s worth keeping in the front of my mind. Possibly even worth writing on a post it and sticking it prominently on my monitor. Not only am I terrible at predicting the future, I’m not even particularly good at knowing how I will react to what I predict so it’s better to just go with my first instincts…