It’s that time of the week again – time to take a break from the discouraging and disappointing news of the week to remember that good things are still happening out in the world. Here’s a quick roundup:

A State in India Has Turned 1,600 Tons of Plastic Trash Into 620 Miles of Road: One of the things many people notice when they visit India is trash and pollution. As someone coming from a much less populous country it would be easy to be really judgmental. I remember thinking, though, as I looked out the window on the train from Varanasi to Jaipur that there was a great deal of trash to be seen. But then it occurred to me: there are over a billion people. Even if half the people dropped only a gum wrapper, the waste laid next to each other would cover a 100 foot by 100 foot space. Now look at what we send out of our apartment in a day – we probably drop a kitchen bag of trash, a half a recycle bag of recycling and small bag of cat litter a day. Then upstream of us is even more waste by the companies making things for us or processing our waste, or the restaurants, coffee shops, and stores we patronize. We all generate a ton of waste and it’s much easier to see when more of us live together. So in some ways, looking out the window of the train was an eye opener: the waste I create is not just a little waste – even if it looks like it. Multiply what I said I toss out in a day by 7 billion. That doesn’t just go away.  Or maybe, if we don’t reuse or recycle what we can’t reduce, it does go away – resources never to be used again. So I really like stories like this – where people are figuring out ways to use.

Nuns build a chapel in the way of a pipeline: I’ll admit I’m really conflicted about pipelines. On the one hand, we really need to move on from petroleum, and pipelines are prone to accidents and leakage. On the other hand, as I look around myself I am typing on a plastic computer. I just ate peanut butter on toast. The food came from a good distance away, some of the food I eat comes from very far away. The toaster I used to make it is filled with petrochemical derivatives as is the couch I’m now sitting on. When I go out later today I’ll likely get on a diesel powered bus to get there. We need to transport oil until we quit using oil.  That said, I am really happy to see people standing up for the greater good in a smart and non-violent way.  I also like to see people taking action when they see a problem. They’re trying to make something better. And whether it stops this pipeline or not, it has people talking and questioning. And perhaps, hopefully soon, we will start moving toward vastly reduced reliance on petroleum.

Autistic boy Receives thousands of cards for an 11th birthday “he will never forget”: I talked above about seeing a need and just doing something about it. But what happens if you combine that action with empathy and the power of the Internet? You get thousands of cards sent to an autistic boy in the UK  hurt by having nobody show up for a birthday party. One of the things that I tried to encourage and to also do myself as a part of the 500 Kindnesses project was to take action when we the opportunity to make a positive difference in someone’s life – whether it’s sending a card to a boy in the UK or someone in a retirement home, giving food, time, or money to someone in need,  or just buying coffee for the stranger behind you rather than questioning yourself, overthinking it and talking yourself out of it. I’m really glad to see this particular story. 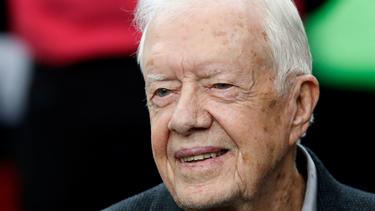 Jimmy Carter back to building homes in Canada after after being treated for dehydration: Jimmy Carter really is my hero. All his life he has been focused on helping people. And even now, at 92 years old he is still helping them. And not just helping but actively getting out there and building houses with Habitat for Humanity.  I spent a day on a Habitat for Humanity build a little over a month ago and let me tell you. That’s some hard work.  I was a bit sore for a few days afterward (and I’m pretty active). I took it easy after that. No wonder he got dehydrated.  But go Jimmy! He was back at it after he recovered. It shouldn’t be a surprise. This is the superhero who didn’t even let being treated for cancer in his 90’s stop him from volunteering at a build.

Knoxville girl’s lemonade stand raises more than $4K for mom’s cancer fight: This one’s a little bit heartbreaking. Every year the family of 7 year old Isabella Nerstad makes a “Bucket List” for the summer of things each of them wants to do. Isabella added “Have a lemonade stand” to the list.  When they started planning it she said she wanted to do it for a cause: Lung cancer.  Isabella’s mom, a non-smoker, had been diagnosed at age 39 with stage 4 lung cancer. Right now she’s in treatment but her body will eventually build up a resistance to the drugs keeping the cancer at bay.  Between donations at the stand and online donations in support she raised over $4,000 dollars to go to lung cancer research.

What good news or happy things have you seen or heard lately in either the news or your personal life? Share in the comments!