I started this past weekend like I often do – with big plans. Saturday I would go to the Farmer’s Market to get fruit then come home, ride to Canadian Tire to get canning jars and pectin then over to the grocery store to get sugar and any other groceries I might need.

It did not work that way at all.

Saturday morning I woke up early but somehow we didn’t all get out of the house until almost 10:30. I say this as if I am confused by what happened. What happened is what often happens with me with things like this. I relax a while, maybe read, browse the web or play board games with Sage and before I know it, the time has flown by.

But no matter, what’s done is done and off we went to catch the bus to the station.  The timing was perfect – when we got there the shuttle bus that takes people the mile or so down in to the ravine to where the market is.  OK, maybe not perfectly timed as Sage got on but by the time Daegan and I got on board there wasn’t room for us. The next shuttle would arrive in 30 minutes.  Not wanting to wait we told Sage to go ahead (She had a cold that just didn’t want to go away and wasn’t up for the walk or the wait) and Daegan and I started walking.  It took about 25 minutes but we finally arrived.

So we wandered some more and eventually came across another spot we’d never been. This was the weekend shuttle stop.  Now we had an idea. I sat there and waited in case Sage came along, and Daegan (who does answer his phone) wandered and looked around.  While he was gone I tried a couple more times to reach Sage – this time on the land line of our house.  She picked up. Her cold had gotten worse, she couldn’t find us and so she’d gone home.

Now it was about 12:30 and Daegan and I were ravenous. We went to the food vendors and decided on a place that offered waffles with bacon and eggs. We lined up for about 20 minutes only to find that by the time we got to the front of the line they were completely out.  And the other vendors were closing.  We needed a plan B.

We looked around at the bus schedule and there wouldn’t be one for 20 minutes. So be it. We walked by the farmers market again and the vendors were all packing up with many of them gone already.  BUT! One vendor was left that not only had fresh peaches but they were half price. And so I picked up two baskets.

We caught the bus to the subway station and now that it was 2PM we were especially hungry. We decided to head to a huge Chinese buffet where we ate enough to put us in near food coma state. But at least we weren’t hungry.

Throughout that whole time I felt myself wanting to be upset or angry about it but somehow I maintained the presence of mind – even as hungry as I was – to see the humour in it and realize my reaction to it was a choice. And so, I reminded myself that I was not starving, I wouldn’t suffer any harm and I was on the way to get food soon enough.  And in the end I felt better as a result.

When I got home, totally stuffed with food, I was no longer up for going to get any other errands done. So much for a productive day.

The next day I woke up bright and early. I cooked breakfast, played board games with Sage (loser does chores) and had a pretty great day. We also walked over to Iqbal foods and restocked my spices, got some veggies and groceries. I also got to practice my Hindi by eavesdropping on others. Nothing juicy – lots of talk about what people needed and didn’t need.  No reason to talk to anyone there. I did get to talk to the paan seller and cashier at the restaurant next door where we had halwa puri for breakfast, though.  I seem to be finding a reason to speak Hindi/Urdu just about once/day. No more than a minute or two but I think it keeps it fresh in my brain.

I think I was still sluggish from all the food though as I didn’t get to the rest of my jam project.  But finally about 5PM I remembered to go shopping.  And so off I went first to the bulk store to get candied ginger and then up to get mason jars.  I briefly considered a stop at Starbucks but decided against it.  Good thing, too, as by the time I got there they were about to close and I got my jars just before their 6PM closure.

By then it was time to make dinner and originally I had considered making a big dinner and jam, in the end I decided to only make dinner. That night was an attempt to re-create the long bean and chickpea dish I had at the Tamil takeout restaurant we went to a few weeks ago. The end result was nothing like what I ate there which was disappointing.

Monday morning and I still haven’t made jam. Not only that, I realized I forgot sugar. Each batch of jam I was going to make took 6 cups of sugar – and I made two. So I put the panniers back on my bike and headed across the river to Sunny who was open on Labour day.  This store has foods from all over the world – There are lots of Chinese and other Asian (Thai, Vietnamese, Korean, Japanese) groceries as well as some North American ones. They’ve also got a great produce section, two meat departments (one halal, one not), a seafood market and a hot table with Chinese food. I would not only get sugar – I’d get some other things for my meals later this week.

But before that, I headed over to Shaheen Tikka House – a Pakistani restaurant that also serves breakfast on weekends and holidays. My rule of “If I hear the server/cashier speak Urdu/Hindi, I’ll try also.” came in handy here. And so, I was able to do the entire time there without English. The server sometimes switched to make sure I understood or if I took a little too long to react as I slowly translated what was said. The food was even better than Sunday’s breakfast. This time I had chhole (chickpea curry) with chicken and sesame kulcha. Delicious.

Because I said I liked my food very spicy, the waiter brought over some fresh hot salsa that was amazing.

Finally, fed and with all my groceries, I got home and was able to make my jam.

First: I had to quickly blanch the peaches to remove their skins.

Then, I chopped them up, removing the pit and put them in a pan with chopped candied ginger and pectin (to make it gel properly) 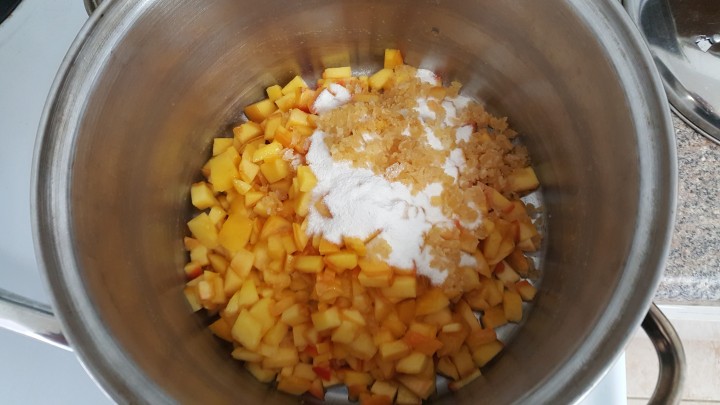 Finally, after bringing it to a boil I slowly added a TON of sugar. 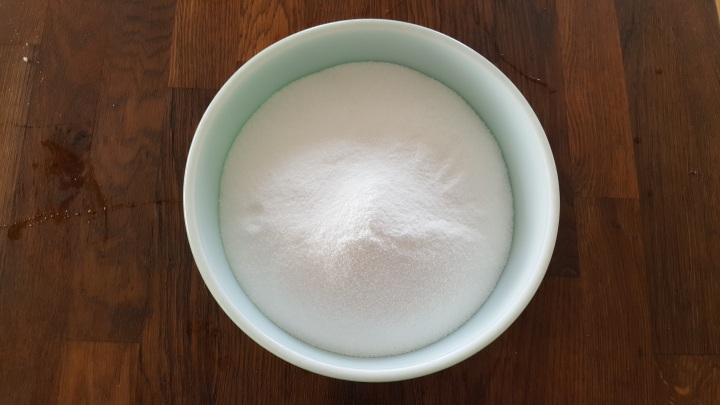 And then let it boil a bit again which made the sugar melt and the mixture start to gel.

And finally, after all that it was ready to put in to jars.  Though if I’m truthful, it didn’t just take me three days to get this done, I finally labeled them yesterday morning.  As you can see I’ve labeled them both in English and Arabic. Many of the jars will be going to some Syrian friends of mine in the building.

I know I could’ve done it faster and been more efficient but I’m pretty pleased with the outcome nonetheless. And the fact that unlike my usual reaction in the face of not meeting my own internal deadlines, I was OK with how it progressed and in the end things got done on time when I wanted them to.  All’s well that ends well.