For those of us here in Canada, it’s Thanksgiving weekend. For many it means big family dinners at home or fancy dinners out. For us, as with many long weekends, it means another holiday we don’t celebrate but still get to enjoy each other’s company for an extra day. (And really, in the end, isn’t that what holidays are for?)

We spent the morning reading the newspaper and playing games for chores (I won several!) before showering and heading out the door. We had a few stops to make.

The first was to a gallery just off the subway line. Sage teaches 7 week storytelling workshops and is looking for a venue a bit more convenient for folks. It doesn’t get much more convenient than this – less than 5 minutes walk from the subway.  While we were there, I looked at some of the art on the walls. The current exhibition is of Nasta’liq calligraphy which was extremely beautiful and has me inspired to take another look at that book about how to read and write Urdu script. Maybe it isn’t so terrifying after all. Or perhaps it is and it’s still worth the effort.

Then it was off to Saravanaa Bhavan – an international chain restaurant known for its South Indian food. They’re also a bit infamous. Some years back I read an article about them which started out with how they treated their staff – apparently they were pretty good to work for. But then the founder got some advice from an astrologer. He should marry the daughter of one of his assistant managers. There was only one problem. She was in love with her brother’s math tutor and had zero interest in him. And so, like the plot from a movie, he just decides to send some thugs over to kill the tutor.  Instead of winning her over, though, it won him a life sentence (that he later weaseled out of thanks to “health issues”.  There are more details to the story here.  So it’s always a little weird to go there knowing that some of the money goes there. At the same time, it’s tricky: so many companies today have similar or worse stories behind them, their executives, and their business practices.

The restaurant is situated in one of many malls in Scarborough that I love. While there are a few major chain stores, there are lots of small ones, cell phone stores, discount stores, restaurants, and even a library. The diversity of the city is really reflected here as well:

As it is a holiday weekend, there was an all you can eat vegetarian buffet and the restaurant was completely packed.  There were so many dishes on offer. Idli, sambar, vadai, several curries, rasam, along with several different desserts. They also had one of my favourite things: crispy deep fried red chillies.

We may not be celebrating Thanksgiving this weekend but we sure ate like it. I went up for another plate (not quite as big) and then once more for a couple of gulab jamun – a dough made of milk solids and flour that are deep fried and served warm in a sugary syrup. It vies with gajar halwa for my favourite Indian dessert.

With something that sweet it’s not just nice but necessary to have something to balance it out. Luckily there was filter coffee available.

The coffee is poured between the two cups to mix and cool it down. It usually also results in my making a tremendous mess. The flavour, though, is exceptional. Creamy and delicious.

We finished our meal just in time to head to our movie. Today we would be seeing Chef, a Hindi remake of an American movie.

When I first started seeing Hindi films in the theatre, this was one of the only cinemas that showed Hindi films. This one takes about an hour by transit, the other one is about 90 minutes by transit.  Now, as Hindi films get more popular, many of the multiplexes downtown show them meaning that if I want to see a Hindi film (or, for that matter a film in Cantonese, Mandarin, Japanese, Korean, Italian, and on and on…) I need only take a short 30 minute transit ride. But the multiplexes are missing a few things that this suburban cinema has.  First off, the price: At $7/ticket it’s almost half of what a ticket costs downtown. Second of all, and most important, is the interval.  Hindi films typically have a short break about half way through the film. This gives you a chance to get up, stretch your legs, use the washroom and make a second trip to the concession stand.  And the third thing is that the concession stand, in addition to the usual popcorn, candy, and nachos on offer at most theatres, they also offer mutton rolls and samosas with delicious tamarind sauce.

I really enjoyed the film. Practically speaking it had relatively easy vocabulary so I was able to rely a bit less on the subtitles than usual. The story was really good as well. As someone who basically took the first four years of his son’s life off to spend time with him (and continue to make that a priority), seeing a movie that promotes dads being more involved in their children’s lives is really exceptional. Seeing a movie that promotes that, following one’s passion, and following it even when other more prestigious and lucrative opportunities are available is awesome. I won’t tell much more lest I spoil it for you. I will also recommend this to my friends who don’t speak Hindi. (Later, after we got home, we looked up the original film made in 2014. I was so glad I didn’t watch the trailer before deciding to see this film. It looked really bad. I don’t think I’ll be going back to see the original)

After the film we literally found ourselves riding off in to the sunset on our subway. It was a good day. Why would I celebrate Thanksgiving when I have so many things to be grateful for every single day? 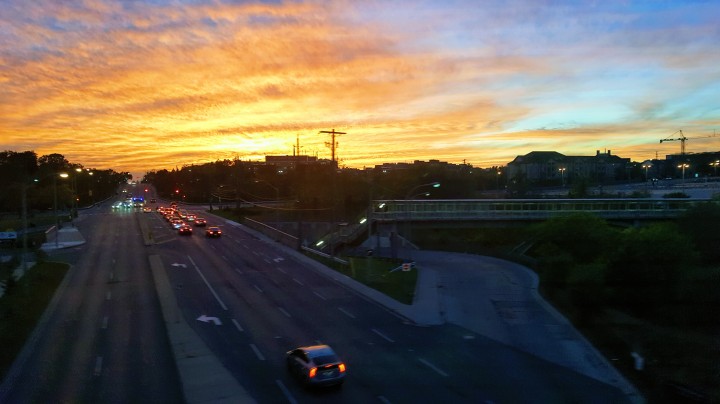 5 thoughts on “Off to the Movies”