I think there’s a 30 day challenge going on lately that has a question about pet peeves because I’m seeing a whole bunch of posts on that subject.  I don’t have a whole lot of them but one that gets me every time is gratuitous negativity.  What is gratuitous negativity? Folks who see good news and immediately find a reason to be negative about this.  Take this example:

How the fuck did the TTC win North America's Transit System of the Year 2017? Based on what? Choice of font?

For the moment, let’s not even look at whether or not this statement is true. What is the purpose behind the statement? (and it’s far from unique) What is it trying to accomplish? What is the desired outcome?  The best I can come up with is “I know, right?”

As for me, I don’t know for sure how our transit system compares to every other system in North America. I can say I’ve lived in places that were very ill served – 30-60 minute waits for buses with no bus shelter were not uncommon, for example, in the major city I lived in in the desert southwest for a while. Other cities I’ve visited had that level of service but coverage was also equally poor so you could look forward to a 20 minute walk to get to your 30 minute wait. Add some bad weather in and you’re looking at a really unpleasant time.

But really, I find that there’s no point in arguing with negativity. It rarely changes the negative person and just leaves me feeling worse. And so I tend to take another approach.

A few years back, when I was doing the 500 Kindnesses project, I noted a similar level of agitation about transit workers in my Facebook feed. Again they were complaints with little desired action other than sharing and amplifying the complaint. Frustrated, I came up with something that would satisfy the goals of the 500 Kindnesses project while also making me feel better.  Why would I argue with folks who didn’t like the transit system. Why not express my gratitude for the things about it I loved.

I had just finished a week-long campaign called “gratitude week”.  In it, I wrote letters to people who influenced me – in my case, teachers who were influential in my childhood, and encouraged others to do the same. Having just finished that, I had gratitude very much on my mind. And as it was the middle of winter I was taking transit much more than I was riding my bike. I make no secret among my friends how much I love transit, but there was one “appreciation gap.”. Sure, I thank drivers when I leave a bus or streetcar, but do they really know how much I appreciate them? The time had come to remedy that.

And so it was that I found myself at 6:00 AM before my morning commute at a coffee shop buying five gift cards. Once I had purchased them, I took five little gift card holders and wrote in each one “Toronto appreciates its transit workers.” (Sure, many love to complain about the transit system, and some like to complain about the workers, but my experiences have been almost exclusively positive.) And so equipped, I headed down into the subway.

(Photo by Loozrboy under Creative Commons License)
It was a snowy morning, the kind of morning I used to dread back in the days when I used to own a car. Not enough snow to make people slow down but enough snow to make the roads treacherous. Yes, the buses can be a little slower, wetter, and a bit more packed on days like that, but they provide the distinct benefit of riding in a large vehicle that is relatively good in snow. And if there’s a fender bender in a bus, you just leave that bus behind and grab the next one. And the best part? While you’re on the way to work through snow and traffic, you’re reading a good book.

As we approached my bus stop, I got my first card out and made my way to the front of the bus. As I got off I turned to the serious 40 something man behind the wheel and said to him “Thank you for driving so I don’t have to.” It took a minute to register what I had given him but his serious demeanor had given way to a smile as he pulled away from the bus stop.

(Photo by Daniel Lobo under Creative Commons License)
On this day I was in Chinatown buying the ingredients for a delicious Thai meal I had planned. I didn’t really want to go, though, as it was about -15C and felt like -25C with the windchill but I knew I’d be glad when we were all eating the red curry chicken that I made. Leaving the store, I went to wait for the streetcar. Most streetcars board only through the front door with passengers paying their fare to the driver or showing their transit passes. However, on some particularly busy routes like this one, they will have one worker stand at the stop and their whole purpose is to go to the back door of the streetcar when it arrives and let people with passes board in the rear doors as well to speed things up. There in this horrible cold – the cold that I balked at walking outside in for the 5 minutes it would take to get between the streetcar and the store and back, was one of those attendants. He was about my age and was pretty well bundled up As the next streetcar approached I fumbled in my backpack for another card. I showed him my pass and then asked him “Have you been out here all day?” “Nah,” he said, “I’ve just been out here for five hours.” “Then you need this:” I said and handed him the card. “What’s this?” he asked and then followed it with a noise of surprise as I boarded the car bound for home and Thai food.

It appears that there are a good number of folks who make every effort to make subway washrooms as filthy and disgusting as possible. It was so bad that at one time, you could smell the washrooms throughout much of Finch subway station – even just as you got off the train downstairs. Fortunately, the TTC has spent a good deal of money renovating the washrooms for improved cleanability and they’ve vastly improved. Of course the fact that they’re easier to clean doesn’t mean that whomever does the cleaning doesn’t have to work hard because the folks who messed up the washrooms pre-renovation still come by, I’m sure. And so, last week I came up the escalator on the way to work and saw one of the janitors waiting outside the men’s room with a large roll of toilet paper in her hand, waiting for all of the men to leave the washroom so she could clean it. I walked over and told her thank you for all you do and handed her a card. Like all the others I’d given out before, this was initially received with confusion, but once it registered what it was she smiled back at me.

I often stop at Eglinton Station on the way to work as I’m generally not very good at eating breakfast before I leave home (I just am not ready to eat, not sure what that’s about) and so I stop there for a bagel. On this day I saw that another person was cleaning the washroom there as well and had left his bucket of cleaning supplies outside the washroom while he mopped inside. I left a card in the bucket and went on my way. 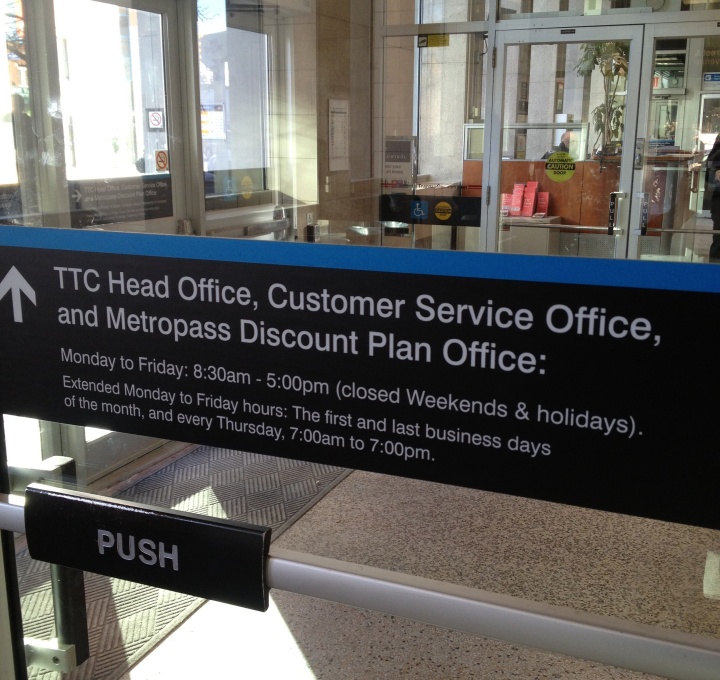 With a daily ridership of over 2.5 million people and over 12,000 employees a transit system is bound to have some complaints. And so it was that late last week I made my way to Davisville Station where the TTC customer service office is. I walked up to the customer service counter and asked “Is this where one makes a complaint?” The man behind the counter confirmed that it was, indeed. And so I passed the card through the glass and told him that it must be a really difficult job and I appreciate that he does it. Unfortunately, though, he couldn’t accept the card as he was not allowed to accept things from customers. He did thank me for the good thoughts though.

(Photo by Neal Jennings under Creative Commons License)
Fare collectors have the opportunity to be extremely helpful throughout their day. In addition to selling tickets/tokens and collecting fares, they do everything from give directions to getting help for people in distress in the station. At the same time, they have a high risk job – there have been a few pretty horrible robberies at fare booths. Knowing now that they weren’t really allowed to accept gifts from customers, and seeing an empty fare collector’s booth with a sign like the one above in it, I slid the last card through the mostly-closed opening into the booth and went on my way.

I take my transit system for granted and going out and doing this – actively noticing and thinking about what people are doing to make my trip from Point A to Point B as smooth as possible gave me even more appreciation for what an amazing thing it is to be chauffeured to and from work, shopping, and recreation every day and all the work that goes into it.

Another unexpected side effect of this project also came to light. The past several weeks had been really stressful for a number of reasons. I’ve been doing a lot of the things people suggest doing when under stress, going to spin classes and getting on my bike when the roads are clear, eating right, and doing relaxation exercises. But each one of these little gestures acted as something of a reset. I would do one and would be so glad to have made someone happy that for a while the stress evaporated and the things that were creating the stress seemed to lose their significance. It is an important reminder that kindness doesn’t just benefit the recipient.

So I encourage you all, going forward, that instead of reflecting negativity back at people in the form of an argument, turn it on its head and try to bring some positivity in to the world and see what happens.

2 thoughts on “Gratitude for Transportation”