Not a bad day at work. I met all my goals for the day. Aside from working (which I can’t really talk much about except to say I had a 2 hour presentation today that went pretty well), I had a couple of goals and I feel like I managed them.

I wanted to run at least 30 minutes today. I had hoped to head over to the nearby track for some outdoor running as the weather was nice. Sadly, I was at the office late and the traffic just gets worse and worse here. The towns here are small but the chemical plants nearby are big. The result is that bumper to bumper traffic is pretty much constant. It was even crawling outside my window when I woke at 5:00 AM. So a ride that should take about 8-9 minutes takes more like 30-40.  But I didn’t let that delay stop me. I just ran on the treadmill in the hotel. It’s a bit more challenging because no matter how good the music is, I just get so bored and want it over. I amused myself today by forcing myself to not look at the timer as often. I’d look at the beginning of a song and then commit to not look again until the song was over. I could manage it about half the time.  As a side goal I made sure to stretch and foam roll afterward. This is something I haven’t been great with which may have contributed to my previous injuries.

The other goal was to eat right. This is so much harder here if you’re not paying attention. I did really well when I used the Rise app. With that I would take a photo of everything I ate and a registered dietitian would give me feedback and help me make better choices.  I actually lost 40 lbs in about 5 months that way.  Then I got careless and ate more of whatever I felt “just this once” until “just this once” became a new habit. I know what I should be eating so now I take photos anyway and share them with Sage as an accountability partner. It worked a treat. I had a good idea of the snacks and meals I should have and ate those. It was amazing how much I had to avoid today, though. There was a chili cookoff happening in one area. Then a manager sent out for lunch for everyone after I’d already eaten. When I said I’d eaten I was invited to just have chips and/or cookies along with a coke. Then I went to another building to meet some folks where there was a big pile of halloween candy. But before that could distract me, it was someone’s retirement party so they had picked up several cakes, ice cream, and doughnuts. Despite all that temptation, I didn’t want to have to tell Sage I was not meeting my own goals that I knew full well I could meet.  It’s not like i was hungry – this would’ve just been recreational eating. Not healthy.

And that’s about all I can tell you about today thanks to the wonders of corporate nondisclosure agreements.  It’ll get better in a couple of days when I have the weekend off. I have a plan for that.

Oh wait, there’s one more thing I can share with you.  Check out this little guy.  I ride through a rural area and then alongside the Mississippi river levee to get to work. There was nothing on my door when I left the hotel, but by the time I pulled in at work, this little guy was clinging to my door – probably clinging for his life as I was going 55 mph most of the way. Probably a good thing he’s got sticky feet! 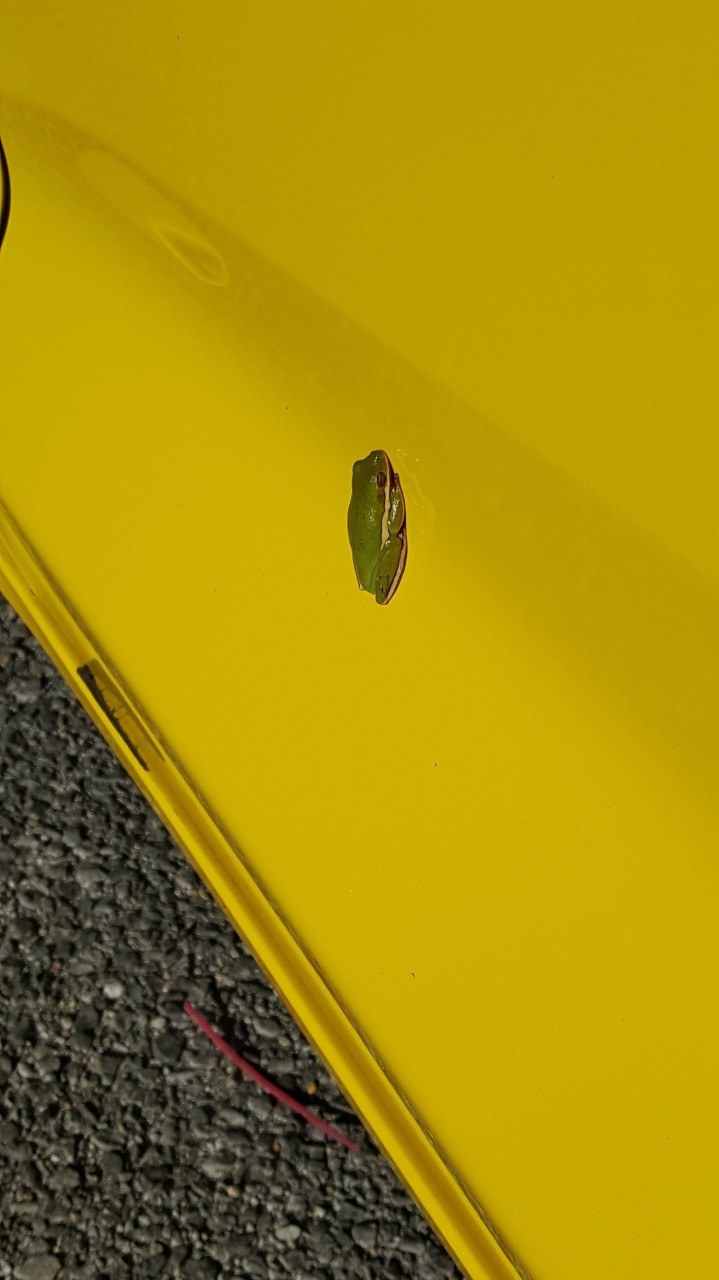