One of the suggested posts in my reader this morning sent me over to Outlaw_nee’s page where I found an eight part series of photos and stories about a recent visit to Banaras (Varanasi) and I realize that while I’ve shared a few stories of my trip to India, I didn’t say much about my trip to Varanasi. Looking at my photos I see that it was actually one year ago today that I arrived there.

After several days in Delhi, the time had come to move on to my next city: Varanasi. I’d booked a ticket on a night train to go there. Doing that online from Canada was an adventure in itself that took over a week of back/forth, copies of my passport sent out and trial and error with several different sites and payment processors.  But the day had finally come to put those tickets to use.

My Airbnb host called a taxi for me saying that it would be the fastest way. We left several hours early thinking we’d have more than enough time. Well as it turned out, we cut it very fine. Traffic was even worse than usual and so we crawled there.  I was advised that if I was late to get a porter to carry my bags – not because they were heavy but because they would know where my train was.  The taxi driver argued with the porter a bit about how much I should pay for the service – I don’t recall the amount but it was between two small amounts I was fine with paying.  As I left, he told me not to pay any more than that.  And then we were off, literally running through the station. The porter was really agile even with my heavy bag and I struggled to keep up.  Finally we got there – with five minutes to spare.  The porter did, indeed, ask for more money and after a moment’s hesitation, I gave in. It wasn’t much and there I was on the train I thought I wasn’t going to make.

Except while I was on it, in a 2AC car, I wasn’t sure where I was to go.  And the clock was ticking.  I had an “RAC” ticket – I was guaranteed to be on the train but I might not get a berth and have to sit if everyone booked showed up.  But how would I find out where I’d be sitting.

I looked up and down the platform and with 2 minutes to departure I found someone with a clipboard and an air of authority and asked him.  He ever so slowly looked down at his paperwork and searched for my name.  I had to reassure myself that this man was an official and certainly wouldn’t dally so much that the train would disappear without me.

He asked me my name again.  Did I not have a reservation after all? Was all my online effort, the scanned passports and trial and error all for nothing? Did I give my money to some stranger instead of to India Railways?

Finally he looked up and pointed at the car directly behind me.  And there, on the side of the car was a paper detailing who would be on the train.  And there was my name and berth number. And not only did I get a berth, I got an upgrade. I’d be in 1AC – a comfortable berth that even had a door.  The older man in the car – a salesman by trade who traveled by train all the time – helped me out, telling me where I could put my suitcase. Before long, dinner was there – a delicious vegetarian meal of matar paneer, dal, roti and a sweet followed by chai.  As we rode east, the sun set.

As I sit here I realize I have very little memory of what was outside the windows on my train trip. In part that’s due to many of my travels being overnight ones. But also from the fact that at least for me the train was a very social place. I spent more time talking to seatmates than looking out the window and the time passed quickly.

Before long it was time for bed. We made our beds, climbed in and out went the lights.  I found sleeping on the train a little difficult. There were stops throughout the night and I’d wake up a little and hear folks boarding and leaving.  In one case at around midnight a couple of guys came in and settled in. Our four person berth was now full.  At another time we slowed to deal with traffic and there was a terrible chemical smell outside. I would smell it again later in the night on the way back through on a later train trip. There must be some sort of chemical plant there. It was a little disturbing to my half-awake mind.

Finally I went to sleep completely, waking up to dazzling sunlight through the window and the sound of “Chai chai garam chai” (chai, chai, hot chai) outside the door – a sound I’d hear over and over on train trips.  The chai was wonderful and cheap. I would drink a lot of it on these trips in part because I liked it but also because I was missing the strong caffeine hit of coffee.  There was no coffee wala saying “Coffee, coffee, kala coffee” (coffee, coffee, black coffee) as there would be in my dreams.  Note to self: in future trips to India – at least the North – I need to ramp down my coffee addiction a little bit before visiting.

Finally we arrived.  I thought I had become used to India – the crowds and how things worked but the minute I got off the train I knew that the rules were all different here and I’d have to re-learn.  Within seconds of getting off the train I was approached by a taxi driver who tried to get me to ride with him. The price was pretty high, as I recall and so I brushed him off but he followed me out.  Finally, after some haggling I found an autorickshaw that would take me to where I was going for 1/3 of the taxi driver’s original quote.

Off we went through the city. It felt busier and more chaotic than Delhi and I was in sensory overload.  Finally, the driver stopped and said he could go no further and that I’d have to walk. He pointed in a general direction and I paid up, not completely understanding. Did he give me the lower price because he only took me part of the way?

I walked in the general direction not knowing where I was going but sure I’d figure it out.  But I didn’t have to.  A man came up to me and asked if I needed help. I told him where I was going and we were off, through the winding alleys of the city, some so narrow that I could touch both sides of the street at once.  Where it was wider, scooters would pass by – honking to let us know they were coming.  At times there would be a cow in the way, or sometimes just their manure. My guide helpfully pointed them out to me so I avoided rolling my suitcase through them. Eventually, though, he thought it safest for him to carry it and he put the massive suitcase on his head and headed off – almost as quickly as the porter had the previous night.

Finally, we were at the guesthouse. My guide asked for a tip and I gave him some money. The guesthouse owner, Sonu, asked if I found the place OK and he asked how far we had to walk. I told him of the 15-20 minutes we’d walked through the alleys to get there and he laughed. “It’s about a five minute walk from where the auto dropped you. That guy just wanted it to seem farther.”  Sonu thought I might’ve been cheated – and maybe from some perspectives I was. As I would learn in my time there, there are many ways to look at it. On the one hand it might be cheated. On the other hand, I had paid for a short tour and a story to tell. I’m OK with that.

I got to my room – clean, simple and quiet.  I put my things away and then went up on to the roof to relax, taking care to avoid the monkeys I’d been warned, could be a little obnoxious (but adorable!) 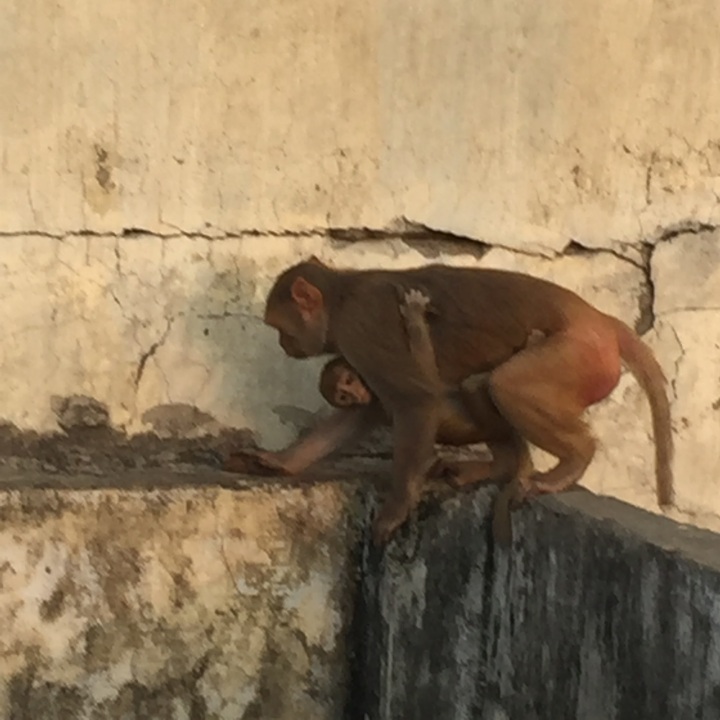 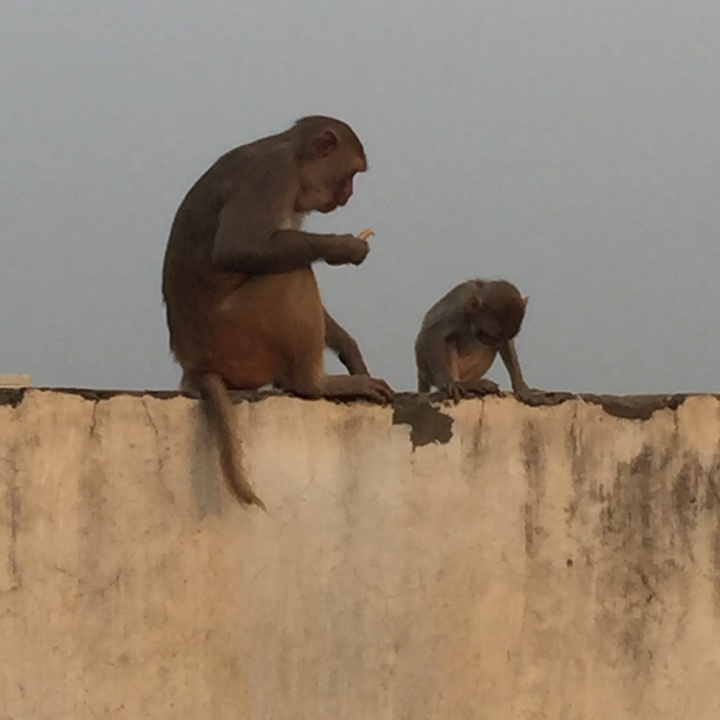 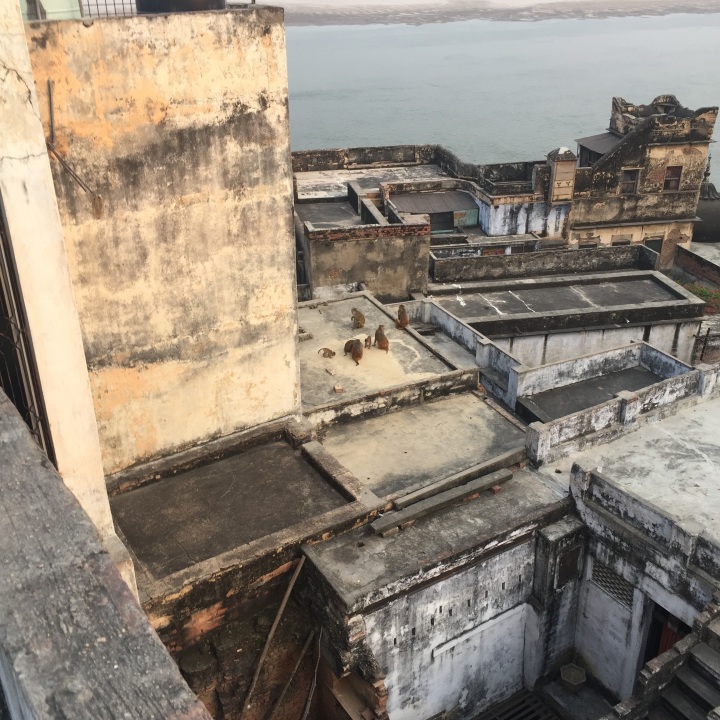 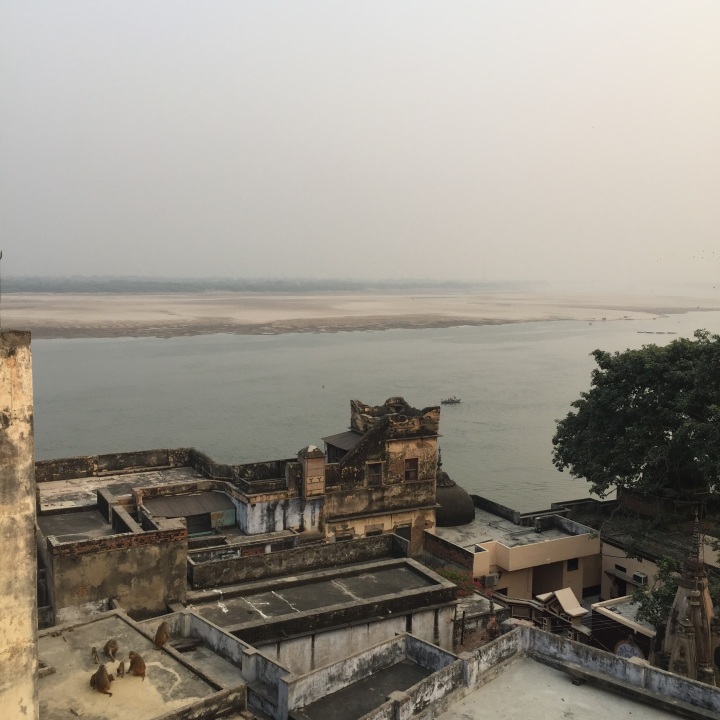 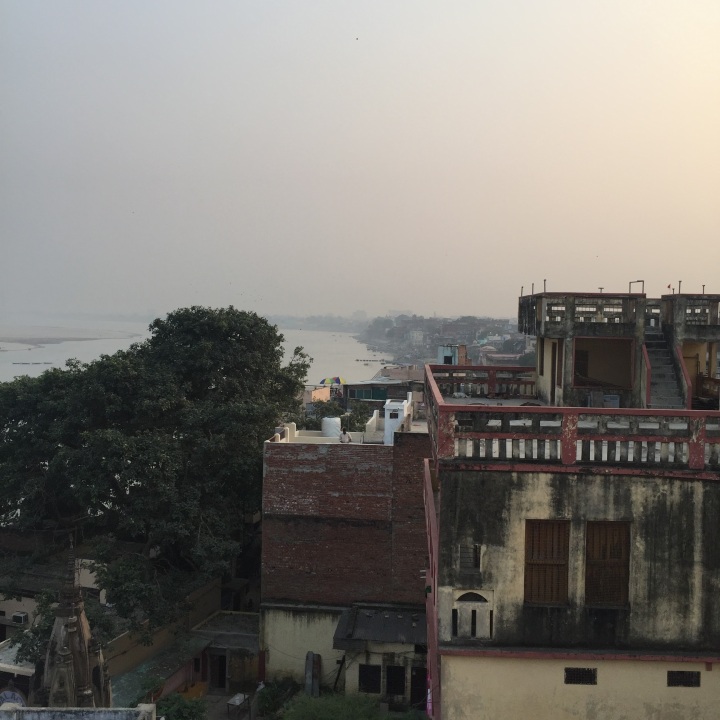 I went next door to a restaurant and grabbed a quick masala omelette – something I ate many of and now make for myself at home. I also managed to get something else…

Despite that coffee, I was still tired and I went back to the room to sleep. It was the most delightful nap with a gentle breeze coming in through the window. Though it might be really hot on the ghats themselves, it was always delightfully cool in the room.  After a couple of hours I was awakened by singing. “Idliiiiiiiiiiiii”!  The idli seller was coming through the alley. I would hear him nearly every day though I never made it down to try, it was always nice to hear him.

Later I would go out to explore as night fell. There was so much life on the streets.

When I was in Bangalore, my colleagues at work wondered why I was planning to spend almost a week in Varanasi. “You can see everything in two days!”  Maybe so, but there were many experiences that couldn’t have fit in to just two days.  Or, for that matter, one entry. I’ll tell more about my experiences there in future entries…

13 thoughts on “Visiting Varanasi Part One: Getting There”