What a week it’s been. Monday morning I woke bright and early at 3:30 AM and made my way to the airport for a flight to Louisiana.  Leaving that early made a difference. Not only did I get from the door of my cab, through check in, and then through customs in just over ten minutes, I was in Louisiana in time for lunch.

Work was pretty much run of the mill for a trip like this. Everything went the way it should, and everything for this year is now completely done. I won’t be going back until we start some new things in 2018.  In fact, I was 90% done by Wednesday night. But there were a few loose ends to tie up Thursday and some of those looked like they’d run over to Friday.

Meanwhile, the weather was changing. Monday and Tuesday it was delightful. If I weren’t working I could’ve happily worn shorts both days and even a bit of Wednesday. But then the temperature started to nosedive. By that afternoon, cold rain was pouring down.

Thursday night I got a text message from Delta Airlines letting me know I could reschedule my Friday afternoon flight at no charge. I really wanted to get home so I thought I would risk it.  And besides, when I tried to get to the website it seemed to have been brought down by all the traffic.  That night, I turned up the heat in the hotel, got a bit of takeout from a Cajun restaurant.

There was, as you can see, a ridiculous amount of food. So much so, that I ended up eating mostly only the gumbo that night (it was filled with chicken) and saved the rest for the next morning’s breakfast.  It’s a good thing I had a nice warming breakfast because this is what I woke up to: 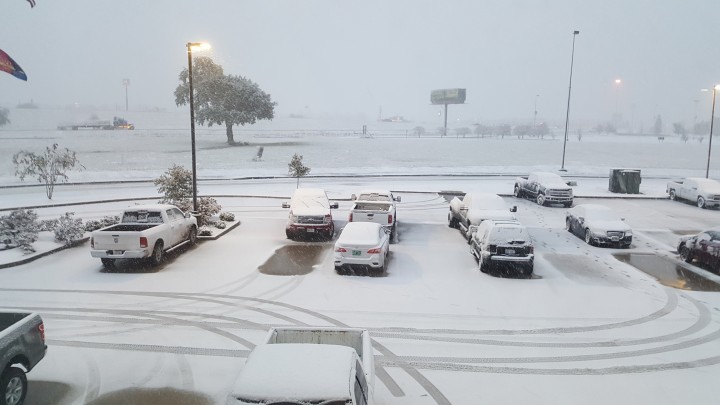 They almost never get snow there and for them, this was a ton. Based on what I saw on the car, I’m going to guess about 1-2 inches – barely enough to warrant mention back home. But there it was a panic. My client advised that only essential personnel should come in. The same emergency announcement system that would be used for actual disasters was used on Friday to remind people that it was cold outside and that stairs could get slippery. The roads were nearly empty which made for fairly decent driving. But I missed a few of the luxuries of home: No brush to brush off the car, no salt or plowing to clear the roads, and a whole lot of people who have no experience driving in this (and access to drive-through daiquiri shops as well. That’s a winning combo!)

I finally finished up all of my work by about 10 and then spent my time on the phone with travel agents and car rental places. I wouldn’t be leaving town that day, but if I played my cards right, I might be able to avoid being stuck another day – and that meant flying out of Atlanta. I had to change my flight from a small, regional airport that is near work to New Orleans where I could fly to Detroit instead and stayed outside there. The drive down was snowy and wet but not bad. There was snow only – no ice.  I only saw one car in the median. By the time I got to New Orleans, it was well above freezing and just a little wet outside.

I made it to New Orleans in time to get lunch next door to the hotel. But there was a challenge there. Only one waitress was able to make it to work that day so she was so busy! (I had to ask myself, though, why could nobody make it to work through the rain? Oh well, I’m really glad that in their inexperience they erred on the side of caution).

The delays were not over yet, though. This morning I woke to find that snow and deicing delays in Detroit meant that my flight TO Detroit was almost an hour late. So much for making the early flight to Toronto and getting there in time for dinner. Instead, I’ve been booked on a flight that gets in around 10:00 tonight. But hey, had I played my cards differently, I would’ve still been in Louisiana so I’m not complaining.

I’m excited to get home, though.  I have a really fun fundraiser I’m doing tomorrow (I’ll tell more later and share pictures) and I start ramping up the vacation.  Next week I’m taking Monday off, the following I’m taking Monday, Thursday, and Friday off, and the week after that I’m taking completely off.

Meanwhile, I’ve got a very fun idea for all that time off.  I am getting stuck in routine cooking – cooking what is easy. Yes, I make some tasty things, but I need to expand my menu a bit. So my goal is to make something new every day I have off (that I’m home for the day – if I go out for the day I may have trouble preparing food at all).  So watch for that in the upcoming weeks.