Today was going to be an exercise day and out of habit I thought I’d look at the Zwift Events page to see if anything fun was happening. As it happened, there was a “One Flat Lap” race that was on for tonight. Most of the races I had done before were longish – 25-40 kilometres so 60-90 minutes. This was under 10. I could knock it out in about 20 minutes.

It sounded fun and so I gave it a shot. I made sure I set my expectations as low as I could get them. After all, while I’ve had some good races, I’ve had some bad ones also. I’m also hugely undertrained – I haven’t been exercising as much as I should. So I set things up and told myself I was in it to have fun and nothing else.

Like every race I got their early and sat behind the starting line warming up my legs with the others.  Before long it was time to go.  Knowing I didn’t have to save power for Future Todd, I could really push, and push I did. I made sure to ‘latch on’ to a few riders, drafting them for a while. 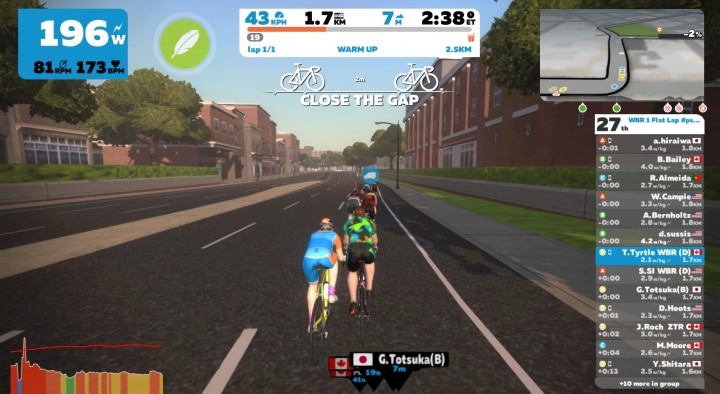 There was something really nice about the view. This was “Virtual Richmond Virginia” – not a course I like that much, but it was just the kind of day I like. It felt like about 7:00 AM on a summer morning. Or better still, 7:00 PM on that same night. I had some high energy music to push me along.

By the end I was really pushing hard. And the end was approaching. I was riding with two others most of the way. We each took turns leading while the other two would let the draft pull us along with a little less effort. That is, until we were within a few hundred metres of the end. Then it was every person for themselves. I stood up in the pedals, pushed with all I had. One of the two finished ahead of me by a matter of inches, the other person ended a second behind me. Meanwhile, I had used up everything I had. My heart rate maxed out at 196 BPM – my muscles were getting all the oxygen they were going to get.

In the end I figured that I did OK, I wouldn’t be last, but probably wasn’t first in my class. (They group everyone in 4 classes based on how much power we can put out steadily relative to our weights).  A few minutes ago, though, I pulled up the results and was pleasantly surprised to find that the other two I was racing with were in different classes than I am. And the end result was….

I won! I came in first ahead of 8 other riders in my class and four other people in faster classes. I’m glad I decided to do it after all!

(Details – and a link to follow me on Strava below, if you’re into that kind of thing…)

4 thoughts on “First Race in a Long Time”