Last weekend we hit a milestone. I’ve now officially visited 10% of the libraries in Toronto. Of this ten, eight were brand new for me and many were in parts of the city I’ve never been to before.

The day itself was really cold with a windchill of around -20 Celsius (-4 Fahrenheit). But it had recently snowed and the day was clear so the day seemed almost impossibly bright. And this time, I had a different person to visit with. Daegan was off of work and was actually meeting someone about the possibility of exhibiting his photos at a cafe in the same area and so off we went.

Anyone who knows Daegan and I know that above all, our meal of choice is breakfast. While sometimes it will be pho, foul medames or nihari, one of our favourites is the standard “Greasy Spoon” diner breakfast. That means big portions, eggs, sausage or bacon, home fried potatoes and toast. And right near where we were going was The Wexford.

It was about a 40 minute ride on two buses to get there. The restaurant was tucked inside a standard Scarborough strip mall. Unlike many suburban areas which sport strip malls with the same chain stores in identical storefronts, the strip malls in Scarborough are different. They have a different feel to them with a huge diversity of businesses from video stores with Tagalog videos to Caribbean grocery stores to Lebanese bakeries and more. And in the middle of all of these businesses you’ll occasionally get a glimpse of what Scarborough and Toronto was like 50 years ago – places like The Wexford.

This place is a Scarborough icon and has been around since 1958. Stepping inside was like stepping back in time. The walls were paneled and covered with Canada and hockey-themed photos, many autographed. A long counter went down one side with several people to be found sitting at stools. Like any good diner, we had coffee in front of us almost the second we sat down. 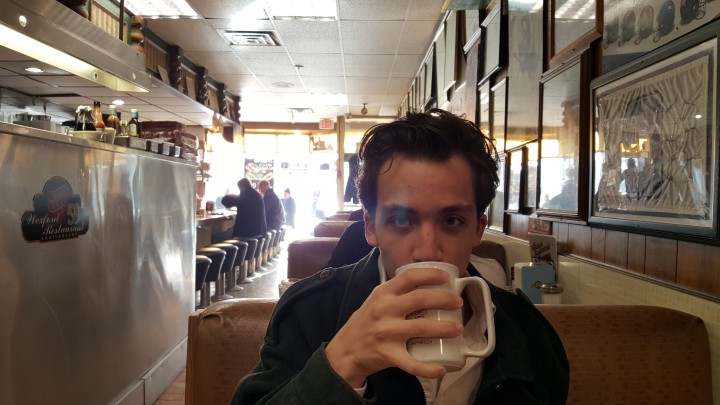 We both went for pretty basic breakfasts. I chose sausage, toast and eggs, but passed on the home fries as I am trying to lose a bit of weight for the beginning of running/cycling season.

As we ate we planned our day ahead a bit and also discussed our upcoming trip to India. We ate slowly, not really wanting to get back outside in to the deep freeze again but eventually there was no avoiding it.

Looking at the app that tracks city buses, I could see that it would be a while before a bus would come to take us to the library. It was only a kilometre or so (half a mile) so we decided to brave it. Off we went.

Another thing I’ve noticed about Scarborough, is that there are more glimpses of the past available if you look. Here, for example, next door to a body shop and across the street from a muffler repair shop was the Wexford Heights United Church  – over 140 years old, with its associated cemetery. And there, on its front lawn sat something unexpected: another library!

The church had placed a Little Free Library outside. We quickly stopped to look through it but nothing caught our eye. There was not much of interest. A decent selection of young adult books and then some other books for adults that seemed more to be cast off because their owners found them as uninteresting as we did.

It didn’t take that long to get to the library and surprisingly enough, we didn’t freeze before we got there. In fact, we had a reasonably good time and didn’t really notice the cold after all. 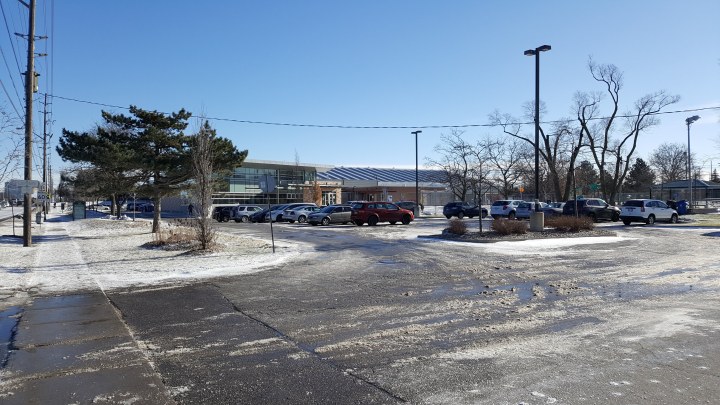 This library was a bit bigger than ones we’ve gone to recently. It is located in a community centre that also appears to have an ice rink and fitness centre – and in the summer has an outdoor swimming pool. Were this available near where I grew up I am not sure I would have needed much else. Year round I would read and all summer if I wasn’t wandering in the woods, I would be swimming.

Going inside we found the space really bright and open. Newer libraries in Toronto and ones recently renovated seem to make sunlight a priority and I really appreciate it. It makes the space so pleasant.

Daegan and I wandered about. This site had a great selection of books about Toronto history, geography, and urban design, and I got a couple of those. Daegan got a few books as well including an interesting looking book that was a combination graphic novel and book of photos of the author’s time in Afghanistan. It was, intuitively, called The Photographer. He later devoured it in about a day and gave it high marks. A few days later he picked up Afghanistan by Steve McCurry. His photos are stunningly beautiful. Probably most of you have seen at least one of his photos, one of Sharbat Gula that was on the June 1985 cover of National Geographic. I am not sure the licensing of the photo so rather than embed it here, I’ll point you to this link which also has an interesting update about her life as of last December. I suspect most people over 40 know the photo, though.

After packing our things we headed back home. Not a lot of exploration for us at this time. It was cold! I grabbed all the books, including Daegan’s so he could go to his meeting.

When he got home he had good news, confirmed by a call a few hours later. He’ll be having a public exhibition of his photos in April.  (For the curious, you can see his photos on 500px or you can follow him on Instagram.)

Watch for a couple more library visits but then there will be a break from Toronto library visits. Daegan and I will be leaving for India in 15 days. If you live in Delhi, Jaipur, or Mumbai, let us know. We’d love to meet up for coffee, a meal, a photo walk or a chat!

If you’d like to read about more of Toronto’s awesome libraries and the neighbourhoods they’re in, visit the Toronto by Library page.