Friday morning I did a long virtual bike ride. While the distance was short, it was very steep. All in all it took just about two hours to ride and about 90 minutes of that was climbing.

As I started up I settled in to a comfortable pace – one I could keep up pretty much indefinitely regardless of how steep the road got. It felt good. There was good music in my headphones, I had water, a banana next to me in case I needed a bit more energy and the room was cool with a fan directed right at me.

I settled in and watched the road. On steep parts, the developers had put motivational graffiti. It reminded me of years ago riding on a charity ride to Montreal. Along the way there were often volunteers cheering every rider on as they passed. In both cases, even though on one level I knew they were there specifically to motivate people, and not just me, I found them inspiring.

But this wasn’t hard at all. I was glad to see the messages, but I wasn’t entirely sure I needed them. Meanwhile, in the chat, there was a different story happening. People were talking about how hard it was being, thanking each other for supporting them and motivating each other, working through something that was obviously a real trial for them.

As I rode, I thought to myself. I’m not a pro cyclist – or even a particularly strong one. So why was I having little trouble on this hill while others were really struggling. And then it hit me. I was saving up again.

On long bike rides out in the real world I’ve been known to hold back a little. If I give 110%, I may literally use up all of my energy before I get to where I’m going. I still remember one day when I was doing an 80 km ride with some friends. 10 km in there was a huge downhill followed by an equally large uphill. I hammered the pedals, sprinting down then up the other side. It was really fun and I went really fast. But I was exhausted at the end. And I had to bring that exhaustion with me for another 70 km, straggling behind the other riders the entire time.

But indoors, that’s not a concern. There are no friends to leave you behind. And in the absolute worst case, there is no need to get to your destination. You’re home already. If you have zero energy at any point, you can stop. So why not give it a bit more?

And so, about half way up the hill I started to push a bit harder, using a gear or two above what I was using before. On the way down, I sprinted several times, doing my best to ensure that at the end of this ride, there would be nothing left in the tank.  Yes, my legs were sore – and would be for the rest of the day – but I felt good. My body was being stressed and would get stronger. 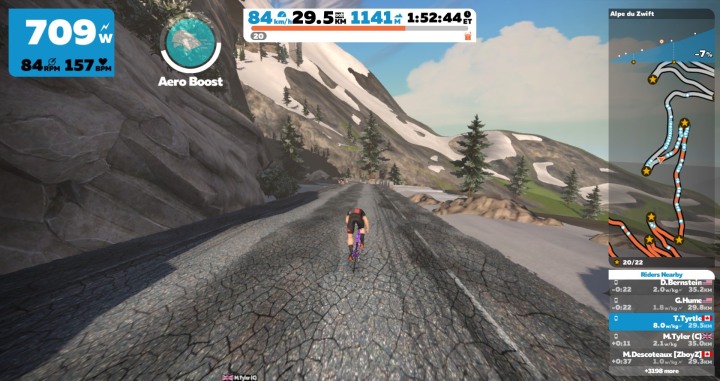 Last night I resolved to skip the relaxation at the beginning and dive right in, making sure that I was pushing really hard from the beginning. There were several opportunities to sprint and I used every one of them. From the beginning I made a deal with myself: I would give 100% for the full length of the ride (enough to get my 125 km in for the week) – whatever that meant. If that meant flying like I’m in the Tour de France, great. If it meant that I was completely burned out for the last 30 minutes and just barely turning the wheel, that was fine too. I wouldn’t hold back now to save for later. 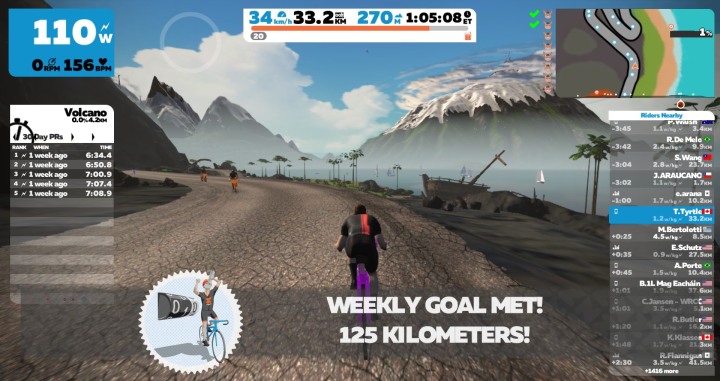 I beat a few personal records as I did this, and had a great time. By the end I was exhausted again, barely able to put out 110 watts of power for my cooldown. But I did it. 125 km for the week. This week I’m going to increase that a bit more.

Why am I sharing this? What relevance does this have beyond someone else who might be riding in an imaginary world? For the same reason that I’ve also been thinking a lot about this outside of cycling: Because whatever I’m doing, I need to ask myself: “What are you holding back for?”  Why give 50% at work even if that’s enough? Why get take-out again when you love cooking and can make something even more delicious yourself? Why relax when you can practice that new language you’re learning?

So I’m inspired to try the same approach in my own life out of the saddle. What if I started a work day with the attitude that I would push as hard as I can – no need to save up energy for a big push at the end of the day. It’s not like riding a bike. What if I set aside more time to study? What if I made an interesting and challenging meal plan? Just like when riding, if any of those truly is too difficult (and not just that I’m lazy or bored), I know I can back off a little. I can make a simpler dinner, for example. But if I go in to the effort with the attitude that I’m not saving anything for later, I’m sure to recognize more benefit.

What things are you holding back your full effort on? What are you saving it for?

3 thoughts on “Using our Future Selves as Excuses”