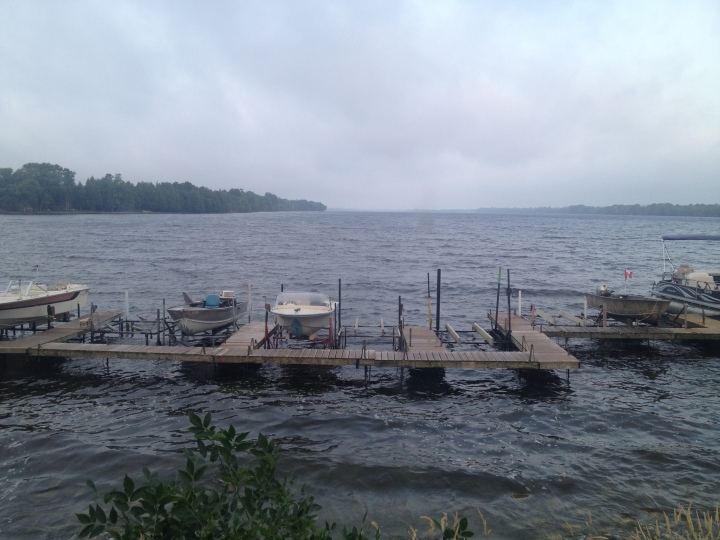 We woke July 4 to grey skies and a very strong and steady wind blowing. But fortunately, it was from the southwest. This was particularly good for us since just before bed we looked at our map together and made the decision to make today a catch-up day. Instead of riding 30 km to the previous night’s host in Picton we’d make a bit longer run for that night’s scheduled host in Harrowsmith – inland from Lake Ontario in what many people describe as “cottage country” – a rural area filled with lots of lakes, with camps and cottages scattered all over. On the other hand, this posed a challenge: with the reduced population, we would also find ourselves with far fewer options for food. Google maps showed few listings for stores along the way and even fewer restaurants. Still, the clock was ticking and the weather was meant to be very hot so we made a bit of instant oatmeal with nuts and raisins and got on our way. Today’s route took us down a number of very small back roads and at least for the first hour or so we saw very few to no vehicles going in either direction. At the same time, we also saw zero options for refilling our important left-front pannier, the snack bag which was getting very low with only a couple handfuls of raisins left.

On the positive side, we had one heck of a tailwind. And so instead of our usual 18-19 km/hr (11-12 mph), we were averaging close to 25 km/hr (almost 16 mph). Pedaling along at this rate was really fun and we covered ground faster than we ever had before. In one of the best parts of the morning as we were crusing along at close to 30 km/hr, we noticed a fox running in the road in front of us. As we approached, it moved to the left side of the road and ran alongside for a bit before turning off into the field to the north.

Finally, after passing through several small villages, none of which had a grocery store but all of which seemed to have no shortage of antique shops, we reached County Road 49 which would take us across the last little bit of Lake Ontario and into the small town of Deseronto. Deseronto looked big enough that surely we could find a convenience store, or even (a man can dream!) a restaurant. But first we had to cross this bridge (sorry – though the view was beautiful, there was no safe place to stop and get a picture so google streetview will have to suffice) – a bit harrowing as the breakdown lane was pretty narrow and the bridge shook with the traffic. On the positive side, there wasn’t a great deal of traffic and we still had our tailwind so we made it across quickly and as expected, found a convenience store on the other side where we filled our snack bag to overflowing. And only one kilometre further down the road we found our way to the Lil Crow Cafe. After riding through a wasteland, seemingly devoid of food and drink options, we had ourselves a feast. Delicious elk paninis, smoothies, blueberry pie, and coffee, left us feeling recharged and refreshed and afterward we sat by the water for a bit, saying goodbye to the lake – the last time we’d see it for the rest of the ride.

After leaving Deseronto we passed through the town of Greater Napanee – the last major town we’d encounter until we hit Perth in two days and so we stocked up further on nuts, gatorade, and carbohydrate-loaded treats.

After Greater Napanee we continued to get further and further from the lake, and it wasn’t long before we noticed that the cooling effect of the lake was also no longer to be found. The sun was high in the sky making for minimal shade even on tree-lined roads. With the warmer temperatures, our pace slowed as our stops for “shade breaks” – time to have a bit to drink, an energy bar, and a few minutes with the helmets off to feel the breeze in our hair – became more frequent.

Cottage country wasn’t all that bad, though, as there were still the occasional stores and cafes to serve the locals and cottage-goers. For the rest of the day, despite our hoarding food, we never came close to running out as there were a few stores to be found along the way. On the one hand this was excellent as we were always well-supplied. On the other hand it was always so tempting to just stay a few minutes longer in the air conditioning so perhaps we didn’t make as good time as we could have. But hey, this trip wasn’t about ticking off kilometres, so who was counting?

Eventually we got closer to our hosts’ home and we turned off the main road onto progressively more rural roads where eventually we would encounter our first gravel roads of the trip as well as some of the biggest hills thus far.

We arrived at our host’s house, a lovely 170 year old farmhouse in a field for what would be a lovely break: Showers, a couple of swims in the pool, a lovely dinner with homemade bread, quiche, and salad, and great conversation with our hosts about everything from city life to British school systems to 500 Kindnesses. We went to sleep exhausted, but in the best possible way for the best possible reasons.

One thought on “500 Kindnesses Ride Day 4: Leaving the Lake Behind”