When I booked my first vacation to India in 2016, I ended up spending a week working with some of my colleagues in Bangalore. After our first day of work they took me out to dinner. Having heard that I liked spicy food they took me to a restaurant that served specialities of Andhra Pradesh, a neighbouring state. “Even people in India think the food is spicy there.” they told me.

At the table were several folks, one from Kolkata, another from Varanasi, a couple from Uttar Pradesh, and one person from Andhra Pradesh. Together they ordered several appetizers and a few mains.

I ordered a chicken dish and said that I liked it very spicy. A few minutes later one of the waiters came by with a small plate with chicken on it. “We made it a little milder than usual because it might be too spicy made the usual way.” I tasted it. It was delicious but, indeed, it could have been a bit spicier. I let them know they could make it spicier. Back in to the kitchen he went, coming out with all of our dishes a few minutes later.

The food was deliciously spicy and eventually I noticed that most of my colleagues had slowed down, leaving only me and my colleague from AP still eating. He was laughing because the others found the food a bit too spicy for them. The next day my colleagues asked “Are you OK today? That was really spicy.” Absolutely – there were no after effects. This is how we eat at home.

Later at a few different hotels I saw “Andhra Fish Curry” available and tried it. It was delicious though not quite as spicy as the food that first night. Yesterday I decided to make it and sent Sage out for a couple of trout fillets.

I searched a bit and found a recipe.

One of the first things I did was make the masala powder. When I was on my last trip to India I discovered the “Mixer-Grinder”. For years I’d been grinding spices in a coffee grinder that couldn’t be easily cleaned, and masala pastes in a mortar and pestle. If I ever wanted to make dosa batter, that wouldn’t happen – I didn’t have the patience or technology. The answer is a take on the common blender.

Instead of a knife-like blade, there’s a blade in the bottom that’s like one in a coffee grinder. I roasted the spices, tossed them in the small container and within seconds there was a powder as fine as what I would get from a store. A few nights ago I did the same with a paste that had roasted spices and fresh coconut and the results were equally amazing.

I needed to soak a bit of tamarind pulp in water. This would provide a sour element to the dish and a distinctive flavour.

Then it was time to prepare tomatoes. I ground those as well in the larger vessel of the mixer-grinder.

Shallots, chillies, and garlic were chopped by hand. 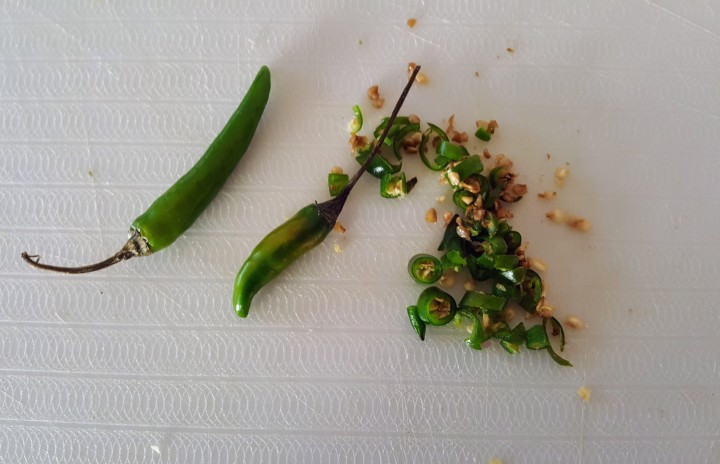 Spices were gathered – cumin seeds, mustard seeds, dried red chillies fenugreek seeds, and one of my favourites, curry leaves. (I’ve enjoyed the latter so much more once I learned they, like kaffir lime leaves, can stay fresh a long time in a container in the freezer.)

The spices were then roasted in sesame oil. It took a bit of searching to find sesame oil in Toronto that was not the toasted sort used for flavouring things like Chinese Hot & Sour Soup.

Then it was time to add the chopped garlic, chillies, and shallots. 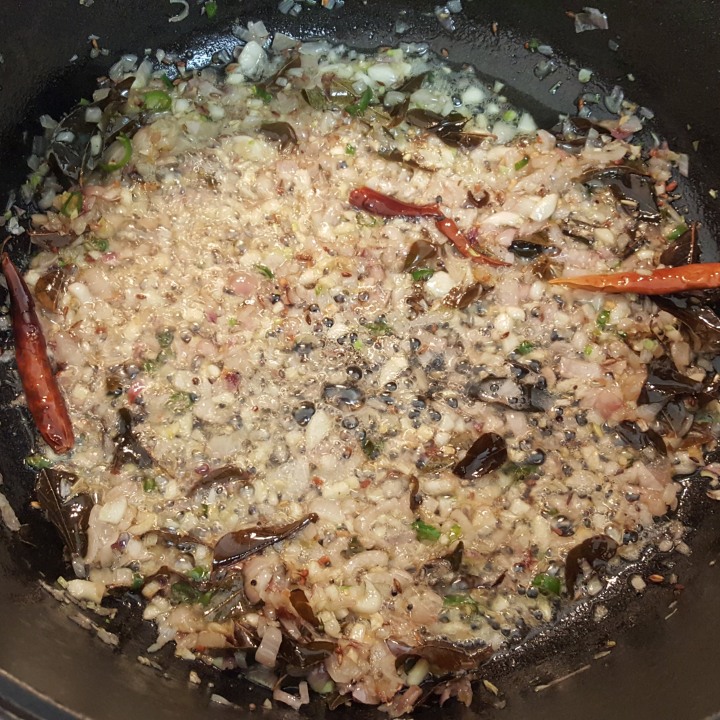 Once those were a nice golden colour, I added the tomatoes, tamarind juice (straining out the seeds before adding it) along with more red chilli powder (I told you it was spicy!), coriander powder and turmeric. This would simmer for 30 minutes. Meanwhile, I would prepare the fish.  The recipe calls for pieces of bone-in fish and though that tends to make for a more flavourful dish, my family isn’t so fond of bones so I had Sage pick up fillets and cut them in to bite-sized pieces.

After that it only needed to be cooked a few minutes. The fish cooked in a little more than 5 minutes. After that I added that first masala powder I made and let it cook for another minute or so before serving it with rice. 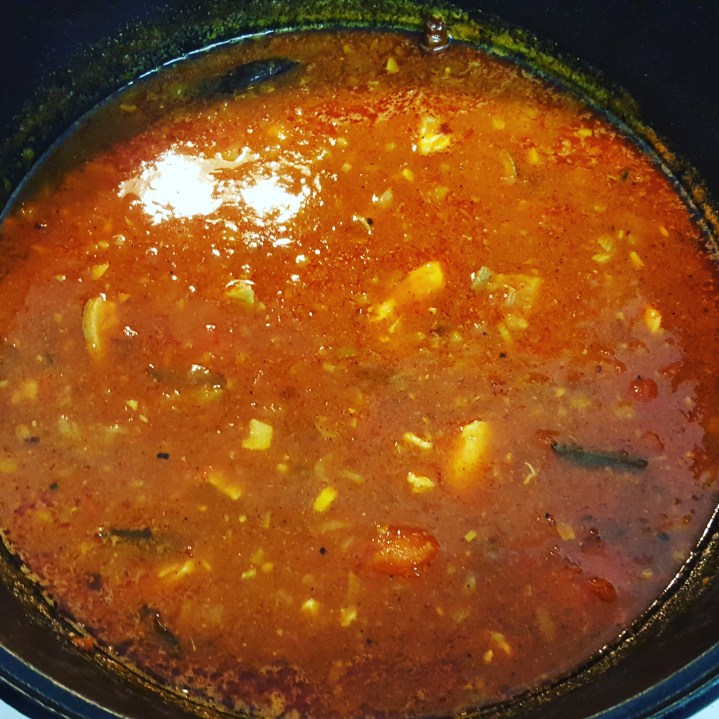 Some meals our family eats and we just serve ourselves a bowl and maybe get seconds. You know it’s a tasty dish in our family, though, when everyone going for seconds involves the rest of the family in the decision: “Who’s having seconds? I want to be sure it’s perfectly fair and we each get the right amount.” This was one of those meals though surprisingly we needn’t have worried. We had enough for us all to be as full as we might be after Thanksgiving dinner and to put a lunch-sized portion in the fridge for later. This will definitely be on the “make-again” list.