This week, Cee’s Which Way Photo Challenge led me to a photo I took some time ago. And it’s not where you might initially think it is. It reminded me a trip I took with Daegan a couple of summers ago: 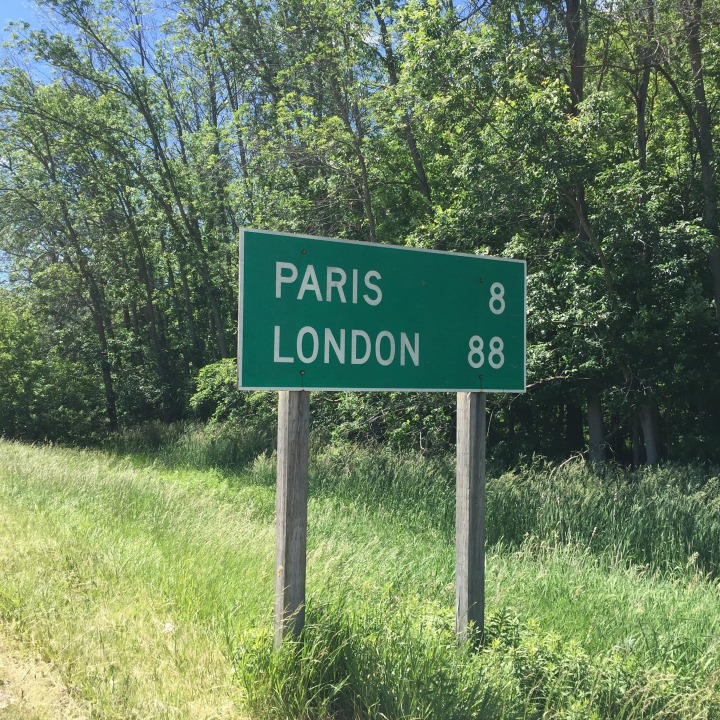 We wake up early one Saturday and after we have a coffee, we take our bikes down to the main train station for Toronto, Union Station. From there, as long as it isn’t rush hour for the route you’re taking (generally meaning inbound to the city on a weekday morning or outbound in the afternoon), you are allowed to take your bicycles on the commuter trains.  We arrive at the station, tap our smart cards on the reader to indicate our starting point for the fare payment for the trip and wait.

Soon it is time to board and being a weekend we have a car to ourselves. We sit down and ride west as far as the train will take us, finally ending at Aldershot station, the westernmost stop for that run.

I’ve done my homework and have a route planned, of course it’s all centred on food. We pull out of the station and ride about 5 minutes before stopping at a diner for a big breakfast. Nearly every diner worth its salt has some variation on the “Lumberjack special” – essentially everything they offer on one plate. We got ours along with, you guessed it, still more coffee.

Thoroughly filled, we head down to the shore of Lake Ontario where we find a trail to take us to Hamilton, a large industrial city. Soon we are able to see it from across the bay.

The ride takes us through residential neighbourhoods and on and off bike paths. At one point we cross under some highway connections and notice the contrast between the noise and chaos of the highway and the calm and quiet of our path.

Eventually we pass through the city and end up on the Hamilton-Brantford Rail Trail. The nice thing about rail trails is that generally speaking they’re designed at a slope to accommodate the fact that trains aren’t good at climbing steep hills. And so, despite Hamilton being on the edge of a large one – the Niagara Escarpment, we don’t suffer much on the way up. The trail is nicely serviced with several washrooms and vending stops and places to refill water bottles. There are a few riders out but the traffic isn’t that bad.  Along the way we come across a lost train stuck on the trail.

After 15 kilometres or so (about 45 min to an hour) we turn off the trail and on to a country road. This takes us along some beautiful rolling hills and soon we are at our destination, oddly similar to the destination of my previous “Appreciating my own backyard entry”. 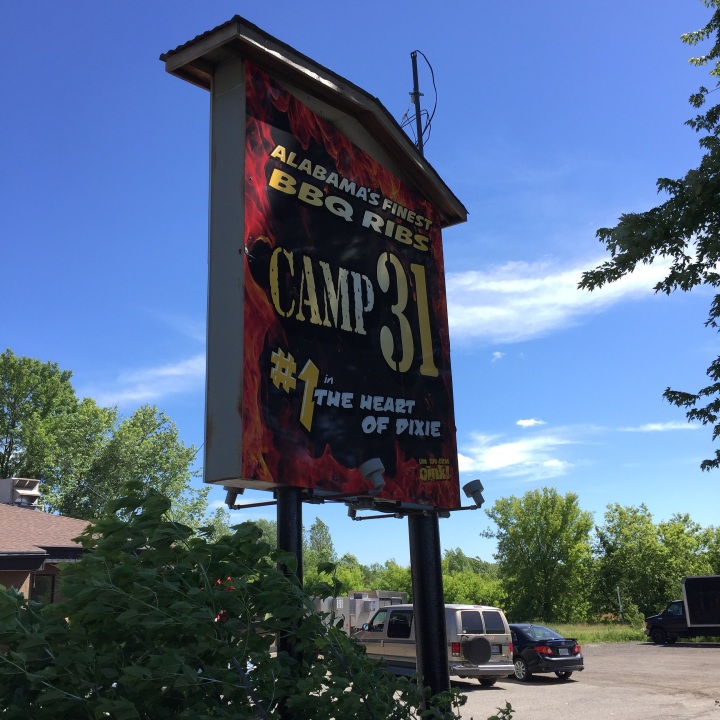 A friend of mine had suggested this place, saying its BBQ was really excellent. Daegan and I are both big fans of BBQ and what better excuse to eat lots of it than biking several hours.  Camp 31 is an unusual restaurant. Their original location is in Alabama but for some reason they also have a second location: in rural Ontario in a little town called Paris.  So on this day we biked to Paris – and now you know the explanation behind today’s Which Way submission. We happened to be on the road that took us to this restaurant in Paris but that if we continued another 80 kilometres further, would take us to the relatively large city of London, Ontario.

How is the food? It is really good – on par with what I’ve had in the south and worth the trip. I got a pulled pork sandwich which was tasty but as someone who’d biked for hours, I probably could have eaten more or some more sides. I also generally don’t drink pop but when we ride I appreciate having the extra sugar so I will usually have a coke.

The trip back is mostly downhill which is very welcome after a nice big lunch. As we ride we decide that we aren’t up for the full ride back to our starting point and I use my dwindling battery to find where we can catch a bus directly from Hamilton to Toronto. We are led through a lot of really lovely, quiet streets filled with tiny mid-century bungalows to a street that doesn’t look like it has changed since the 1980’s. There we wait in front of a store that we wish hadn’t closed just before we got there. 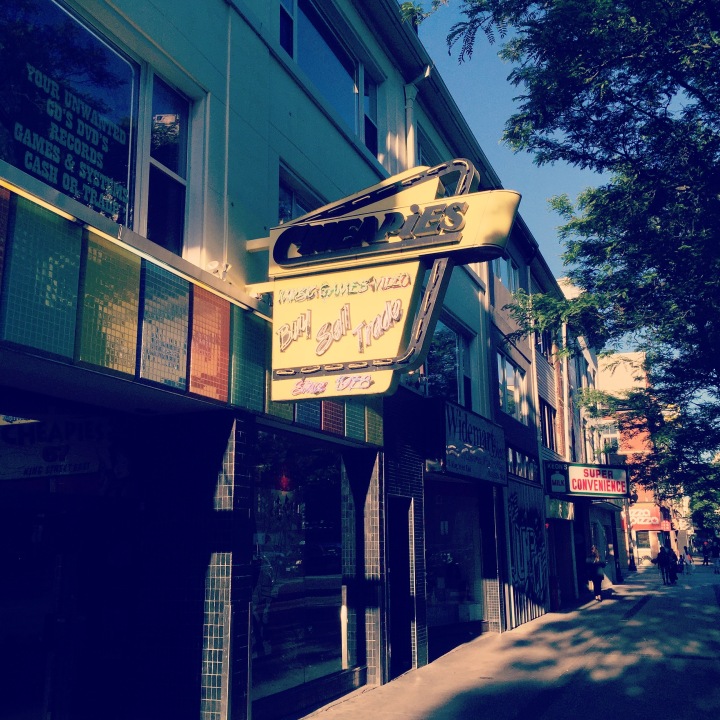 Traveling by GO Bus (Commuter bus) is really easy with bicycles. The racks on the front accommodate two bikes and can easily be dropped down and your bike secured on them. Then we hop in to the air conditioned space inside, sit in the cushy seats and relax as we are carried comfortably back to our starting point in Union Station.

After all of our riding around and the trip back home, I take a look at my odometer. We’ve gone quite a respectable distance, definitely earning our big meals. 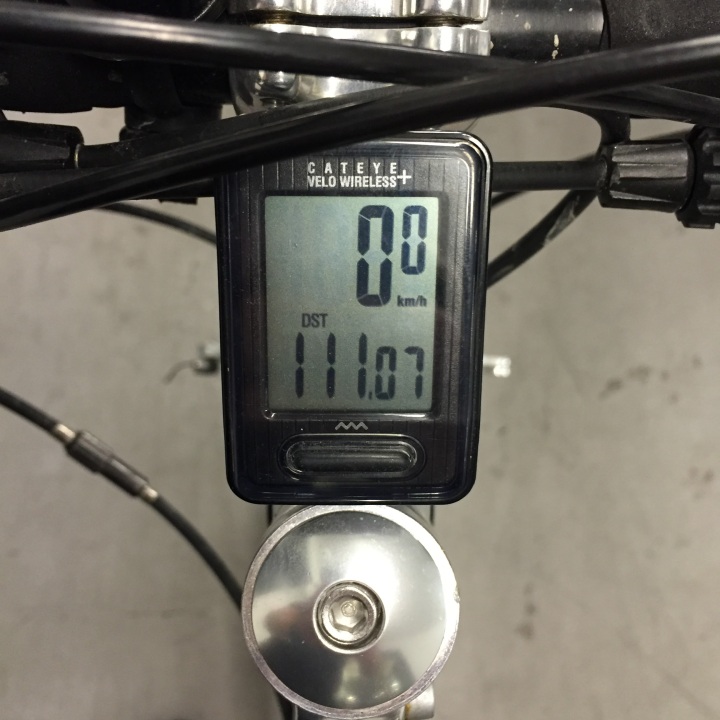 7 thoughts on “Appreciating My Own Backyard #5: Cee’s Which Way Photo Challenge: Camp 31”