The night passed quickly and we woke in our hotel relatively early with neither of us having any stories of spooky apparitions in the night. I guess the innkeeper’s wife could see just how comfortable we both were. And so we packed our things and headed down to grab breakfast and check out. Breakfast here was relatively simple – donuts from a box and coffee. Not the best considering what we had ahead of us.

What we had ahead of us was more of lovely US Route 202 and much more ups and downs. In fact, this day, of all days, would have the most climbs of any day so far – almost 1,300 metres over about 70 kilometres of our 110 kilometre day. And it started about 3 kilometres after we left the hotel. There’s nothing like pushing hard to climb hills with only a couple donuts in your stomach. But fortunately, after about 10 kilometres – almost 2 hours at the rate we were now going, a diner appeared. There we were able to fuel up on eggs, toast, potatoes, bacon, and coffee before heading out.

The hills were pretty relentless for most of the day. Of course we just kept counting on the fact that what goes up must come down, and finally we had the biggest descent of our trip. Even applying the brakes to be safe, we hit the top speed of our trip: 82 km/hr (just over 50 mph). We coasted in to a restaurant where we picked up a celebratory snack near a covered bridge in West Cornwall, CT.

While there were more mentally challenging days, this would be our most physically challenging one. The hills just kept coming and coming for the entire day. But eventually we made our way out of the worst of the hills and, for the second time in our trip, we entered New York State – but we were still three days ride to the end. Still, not long after we crossed the border we reached Wassaic and saw our first Metro North train. We were now within commuter rail distance of the city. We were really going to do it.

One thing we didn’t expect to see came along when we turned off the main road onto another dirt road near Wassaic. As it had been a while since we found a washroom and there was a good place to pull off for a discrete trip to the bushes we took the opportunity. And when we did we found this: 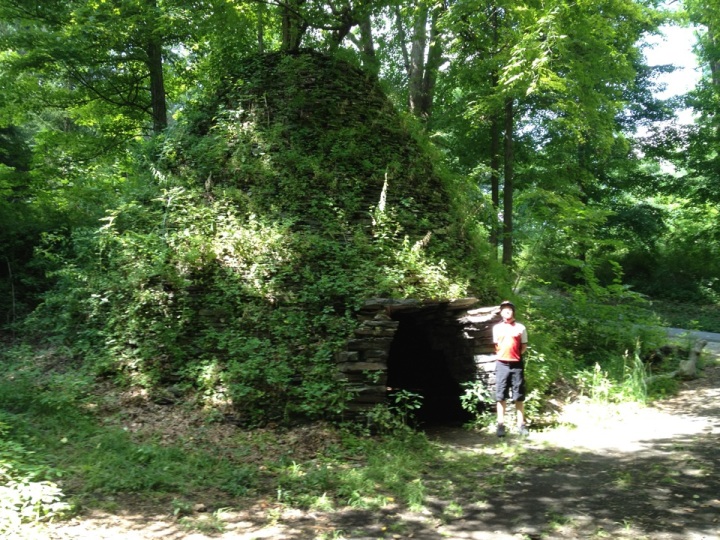 We posted it to our Facebook group and there was a fair bit of discussion as to what these might be. In the end, they turned out to be charcoal furnaces. In any case it was a very cool find, and accidentally stumbling onto these was one of the favourite parts of our trip.

We headed further down the dirt road, now fighting both heat and mosquitoes and the occasional dust cloud when a car would go down the road. And though it was slow going we persisted. As we approached Poughkeepsie, New York traffic picked up significantly but at least at this point we often had a paved shoulder to ride on and drivers were, for the most part, considerate when passing. Eventually, after getting a little lost in downtown Poughkeepsie, we found our way (this time thanks to Google Maps instead of caused by Google Maps). Once we got back on track, we caught our first glimpse of the Hudson River – our friend for the rest of the trip. We made our way on Walkway Over the Hudson, a restored railway bridge.

The sun started setting pretty quickly after we got across and we were still about 20 kilometres from our stopping point. I was getting a bit nervous as we still didn’t have lights and I really didn’t want a repeat of our night heading to Rigaud. Fortunately, though, we had a smooth, flat rail trail for most of the way and enough energy left over that we could push ourselves. We arrived at our friends’ house in Clintondale, NY. There we were able to relax, recharge and enjoy some friendly company (and an adorable little dog) for the final rest day of our trip. And as our luck would have it on this trip we, once again, timed it such that our rest day coincided with a rain day. And so we got to enjoy home-cooked food (and to be able to cook a bit myself – it had been too long!) while the rain helped drop the humidity a bit. We were now two short days from the end of our trip.