Though I didn’t let on when it happened, the 500 Kindnesses ride almost never happened. Daegan and I had been on several training rides and the distances were going up nicely. In early June just a couple of weeks before departure, we ended up getting out the door too late to make our usual group rides. But this would be no problem for us. I sat down at my computer and mapped out a route of nearly 100 kilometres for us to take instead. We hit the road just after lunch and headed for the beach.

The ride went really well for the first 30-40 kilometres. We took a break at a local grocery store and picked up snacks and sat outside imagining that the real trip would be a lot like this. Just the two of us enjoying ourselves, stopping where we wanted and when we wanted. But then we turned north away from the lake. And that’s when things began to go bad. As we left the lake behind, we left the cool lake breezes behind as well. And before long I was hotter and more miserable than I had ever been. And then, after a large hill, it got worse. I was extremely hot and every stroke of the pedal began to feel like a Herculean effort. It didn’t get any better when we hit the top of the hill and at that point I knew I wasn’t going to be able to make it another 50 kilometres to do the loop and so I proposed to Daegan that we make our way directly home instead of via the roundabout loop we’d planned. We headed into a neighbourhood filled with industrial parks. Everything seemed to be covered in pavement and all of the pavement was radiating heat upward like an oven. We stopped at a Dairy Queen to enjoy some air conditioning and have some ice cream to hopefully cool me down. But while the air conditioning felt good, it wasn’t cooling me down and my head began to pound. Finally, we finished our food and it was time to head out again. We only had a few kilometres to get home.

It was a hard ride for me. Not just physically, but mentally as well. As Daegan was trying to cheer me up by singing from behind me, my brain was working overtime. What the hell was I thinking to try to ride all the way to NYC? I was clearly in no shape to do that – I couldn’t even do a quick 100 km in in our hometown.

We got home and I was in even worse shape. I spent a good five minutes trying to angle the bike to lock it to the porch before Sage took the lock from me and sent me into the house for a cold shower. Once I got there, my emotions got the best of me. Not only was I unfit to do this, I was going to let my son down who was really looking forward to this trip. And all the people who made pledges of acts of kindness – they’d be let down as well. What a dumb idea it all was. What the hell kind of dad was I to get my son’s hopes up like this? I should just give up.

Looking back, I am pretty certain I was suffering from heat exhaustion. I had all the symptoms, after all. Once I had spent a few minutes in the shower I began to think more clearly but I was still concerned. Perhaps I had taken on too much. Sage came in a few minutes into the shower to check on me and listened to me talk about all of my worries. After she heard me speak she reacted the perfect way, as she often does. She laughed at me and told me I was being ridiculous. What had happened that day was less about training and more about needing to be smarter about hydration, staying cool, and leaving early enough that the day wasn’t at its hottest when we were exerting ourselves the most. All of those things could be easily accounted in every other ride we took.

Mostly I believed her, but I still had an insecurity that stuck with me. And that insecurity got a bit bigger when, after our panniers arrived, we filled them and took the bike out for a test ride. We took it around the block and it was noticeably more difficult. We had hundreds of kilometres to ride, and just riding down the street was difficult. Probably we should have started earlier and trained with a load instead of an empty bike. Forget that, we should have done any training with a load as our next “training ride” would be the first day of the ride itself.

When I got home we all talked again and Sage, again, thought I was being ridiculous.

As it turns out, as you all know, I was being ridiculous. I had created a whole series of very dramatic movies in my head about what it would be like. There would be tears, possibly injuries and hospitalization, conflicts that would test the relationship of a father and son. But in the end, the answer turned out to be simple: This is our ride. And because it’s our ride we can do it how we want. And for us that meant making lots of stops, what we called “Shade breaks” on the trip where we’d pull to the side of the road, find a tree to sit under and snack and chat for a few minutes. It also meant not riding as if we were constantly in training or actually racing. With a 50 lb bike and 50 lbs of gear, we were not going to go as fast as I was used to going on long trips with a completely unladen 27 lb bike.

And whatever happened to “Shower Guy”? That irritating guy who knew all the bad things that would befall me? Well, we got on the road early on a Sunday morning and pedaled off at a comfortable 20 km/hr. And literally within a couple hours any worries I had about not being able to make it had evaporated. We didn’t cancel the ride, instead we had made this ride ours and it was good. 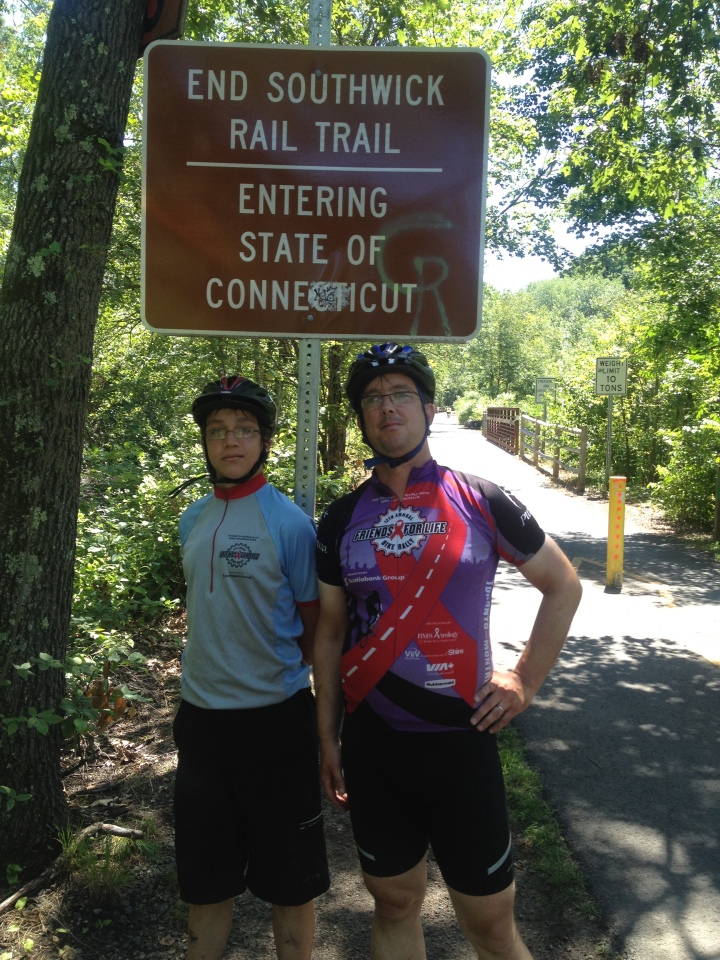 So why am I telling you about this? Because for me, this theme has been integral to this project since it’s start, even as I, myself, wasn’t entirely able to articulate it. For me this project is about listening to the encouraging inner voice that tells you to do something nice for someone and to ignore the other voices who might detract from your idea. We don’t help a panhandler because we question what they might do with the toonie we give them, we don’t buy a stranger a cup of coffee because we worry that they’ll think we’re weird or that we’re hitting on them, and we tell ourselves that there is so much suffering out there that there is no point in helping someone as you can’t help everyone. Well the truth is, that the toonie might help, and isn’t likely in and of itself to cause a great deal of harm, that stranger is likely going to be thrilled and possibly buy someone else a cup of coffee.

In the end, everyone is filled with great ideas, and every one of them has some chance of failure and some chance of success whether they’re an act of kindness, a bike ride, or pursuing your life’s dream. But I can tell you one way to be absolutely 100% certain for your idea to fail: don’t act upon it at all. And you stand to miss out on some of the most amazing experiences of your life.

3 thoughts on “How to be a Guaranteed Failure”