It’s Saturday afternoon and Sage and I have finished the last of our improv classes. Today’s class has been especially fun with Sage and I doing several really fun scenes together. We used to do a lot of improv together but hadn’t for many years. It’s good to be back at it and I like the scenes and characters we discover together.

Today Sage has a plan again. She takes my hand and leads me to the subway station where we grab an eastbound train. We continue past our usual stop for home to the next stop: Donlands station. Up we go to the bus platform where we wait for a bus.

At this point I suspect I know the name of the library branch but nothing more. I’ve never visited it. About five minutes after we board the bus she pulls the stop cord leaving us at the intersection of Gerrard and Jones.

Sage has a few plans before the library, though. First off she heads west, stopping at Gerrard Square – a small shopping mall with a few stores, a small food court, a Wal Mart, and a Home Depot. There’s no library in here so I’m curious what we’re doing here.

Sage doesn’t leave me hanging long. She’s been reading a book by someone who got fascinated by photo booths. It talked about their history and then ended with a statement that the old fashioned ones with a chemical developing process are gradually disappearing – they create too much toxic waste and the chemicals are dangerous to handle and dispose of. There was meant to be one of the last ones left in this mall.

An “Amazing Race” like task ensued where we wandered through the mall looking for the booth. Eventually, I saw it off in the distance. 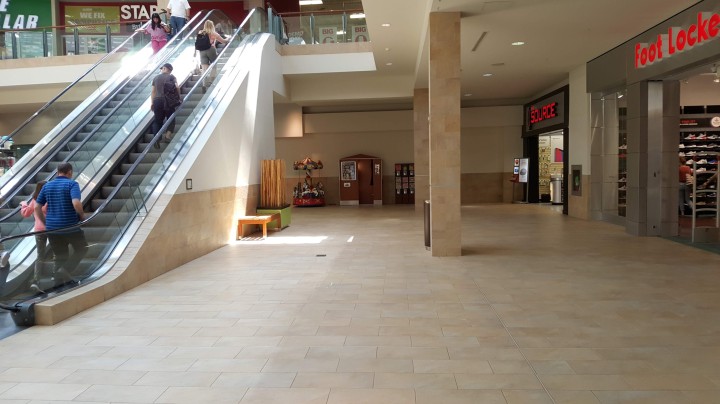 As I got closer, though, the sad news became evident. 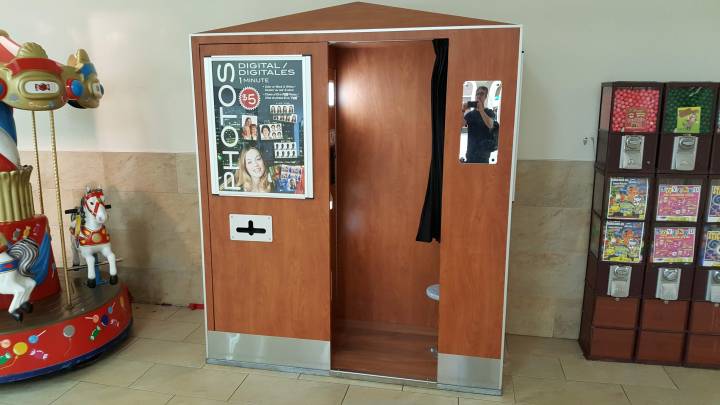 This one got upgraded to digital. We were too late.

We still couldn’t pass up taking some silly photos.

Photos in hand, we leave in search of food. Sage had some plans for that as well.

Today’s plan was to have Caribbean food. We’ve been to The Real Jerk once before and were completely blown away by the deliciousness of every single thing we ordered 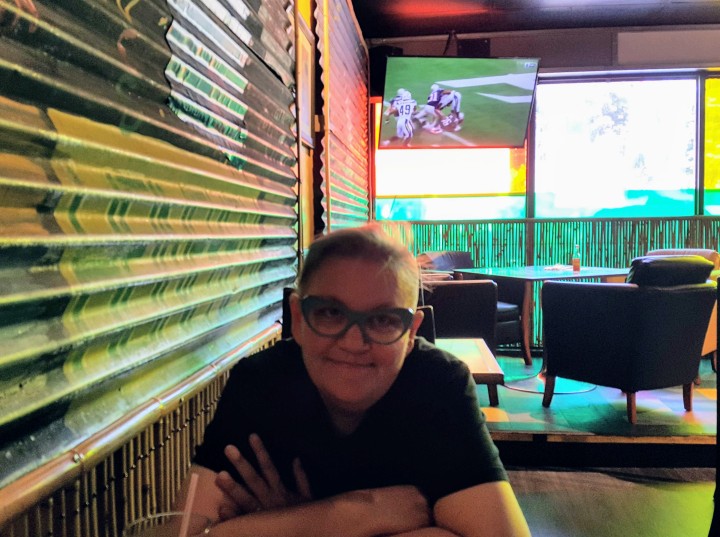 While it was warm outside, it is quite cool and comfortable inside.

The first item up are “Dumplings and oxtail gravy”. I have to admit I was expecting dumplings as something lighter and stuffed – like a shumai. Instead we got this – a pair of delicious savoury donut-like dumplings. On their own, they were tasty but with the gravy on top they were amazing. We talk little as we eat because we’re so hungry. We should have eaten hours ago.

Our lunches arrive and they’re both very large. 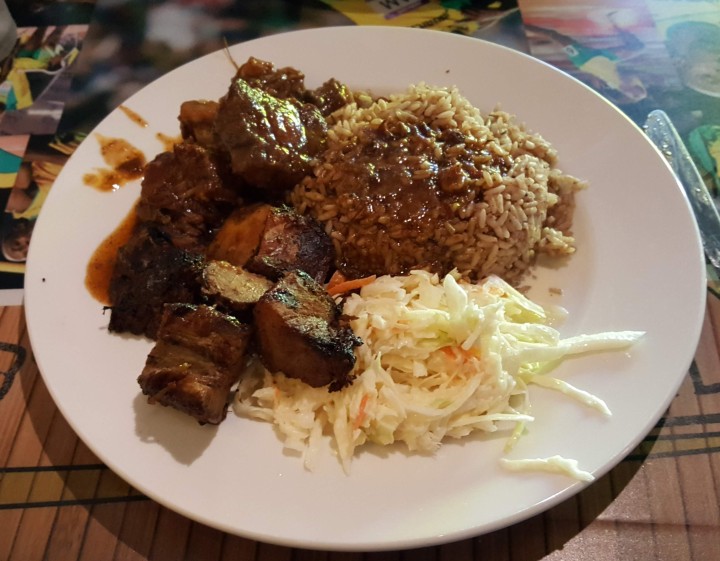 I have oxtail and “jerk pork”, both beautifully spiced. On their own they’re not hot but every table has a bottle of pepper sauce on it and I put it to good use. Next to the meat is a large portion of rice and peas (beans) with more oxtail gravy on it and cole slaw. The cabbage is crispy and it is made with vinegar – which I prefer to the more creamy kind.

Sage gets jerk chicken and curry chicken and enjoys hers as well. After tasting hers, though, I think they’re both really good but I’m happier with my choice.

We settle the bill and head back to the original intersection and head south on Jones. We go by a few interesting stores along the way but don’t have the time to check them out – maybe another time.

Finally, soon afterward, we arrive at the Jones Library.

The stone, glass, and steel give me the idea that it would have been around when I was a kid but I can’t quite get the age of it. I think close to 1973. When I look it up, though, I am proven wrong. This library was built in 1962 and originally was exclusively a children’s library. It would be that way until 1976 when they made it for everyone – and then promptly closed it for renovations until March of 1977.

Inside is quite busy with many tables occupied and lots of computers in use as well. The space itself is relatively small but really well lit. While the skylight makes the place look dated (in a good way) from the outside, the sunlight it lets in makes the space a delight. The selection isn’t bad but when I compare it to some of the other branches, I put it squarely in the middle. It is not like some of the smaller branches I’ve visited that would simply be a place for me to pick up my holds if I lived there. On the other hand, it is not a branch like some others where I could browse for hours and end up coming home with more books I’m really fascinated by than I could possibly read in several months. This time I leave with nothing.

On the way out we notice a great exhibit of photos from years past: 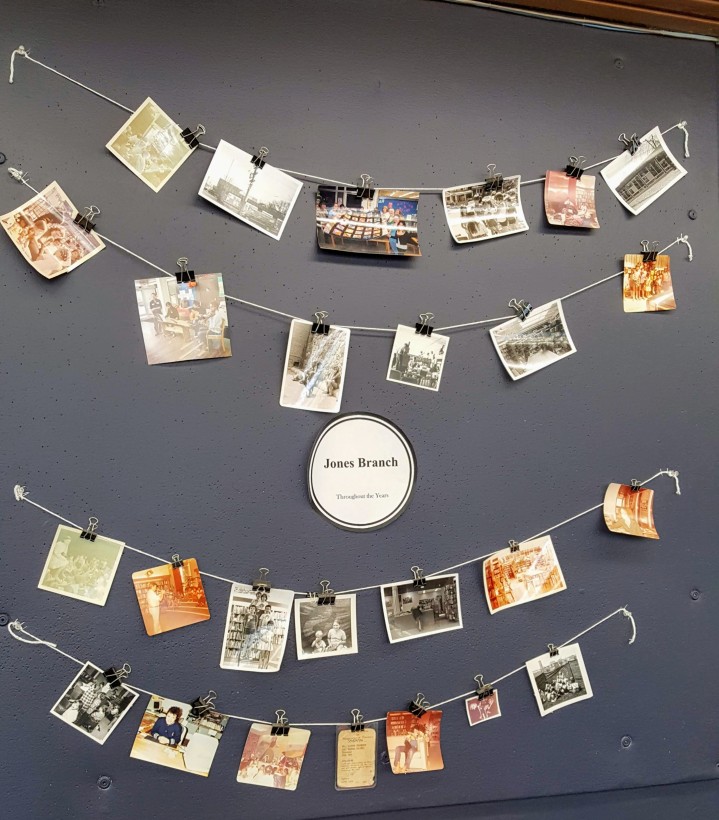 I had completely forgotten about paper library cards that were simply a combination of simple ID card and a contract between you and the library.

One of the photos looks like it would’ve been taken during my own childhood. 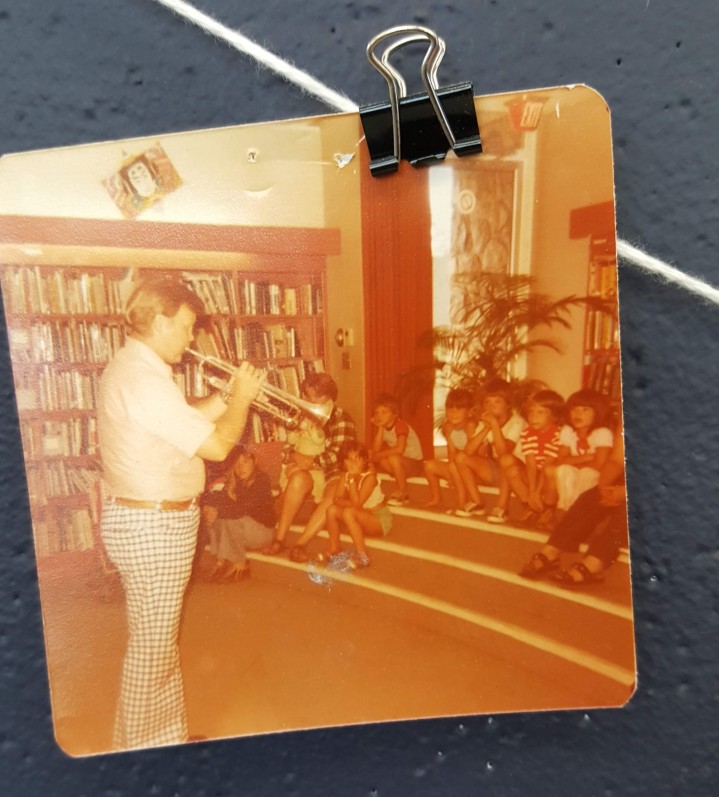 As I leave I see what a trip to the past this was. I may waiting for a bus on a Toronto street, checking my phone to see when the next one is due. But at the same time I am sitting in a beanbag chair almost as big as me, feet feeling the green shag carpet as I read The Phantom Tollbooth wishing that instead of taking a field trip to the Shelburne Museum next week we could all go to Dictionopolis instead.

If you’d like to read about more of Toronto’s awesome libraries and the neighbourhoods they’re in, visit the Toronto by Library page.