On Monday we go to the Museum of Modern Art. We had actually visited in December of 2016 but with school holidays it was so busy that it was impossible to enjoy our time there. There were always crowds between you and whatever art work. Just have a look at the room where Van Gogh’s “Starry Night” was:

This time, there were a fair number of people, but not so many as to impact the enjoyment of the space and artwork.

Upstairs, there was a special exhibit of Adrian Piper’s work. I hadn’t heard of her before. Daegan was particularly excited as she was known in part for her photography. I admit that I found some of her earlier work a little pretentious but as she got older she got more blunt in her calling out inequality. This one in particular really got me.

Throughout the museum we noticed a phenomenon. There were a great number of people who were walking from piece to piece. Stopping for a second, snapping a photo, maybe snapping a photo of the caption, and then moving on without stopping to look at the photo. Daegan made a sketch of what he saw in front of “Starry Night”. 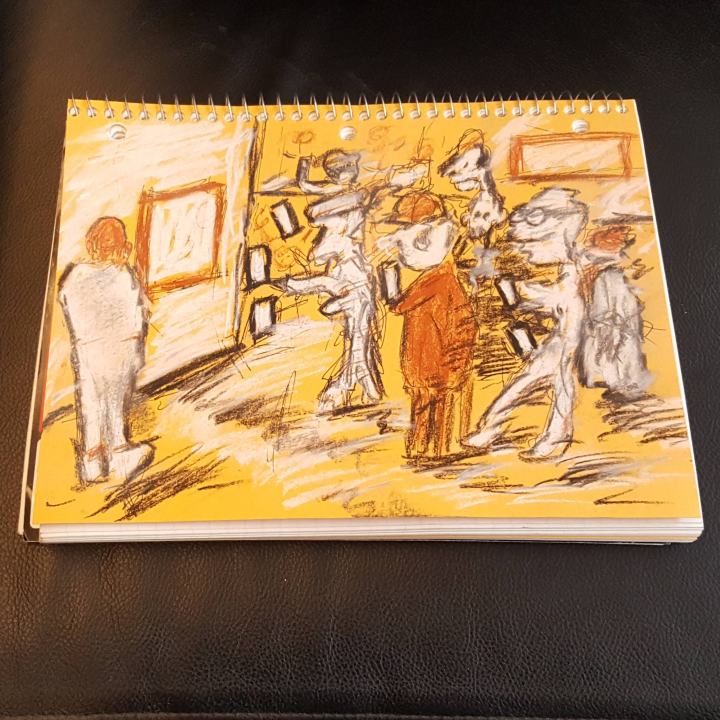 I thought about what this could possibly be about. Are the people taking photographs to log their presence there? Is their photo to be shared to show others that they’re there? Would they ever go back and look at their photos? It’s hard to imagine they would with the hundreds of photos they were taking. It made me think that there are whole data warehouses whose space, electricity, and the jobs of administrators to building security – all of them devoted to housing data of photos people may never look at.

In the end I narrowed it down to two theories:

These ideas bounced through my head all day. For many, travel is like this as well: capturing selfies in front of the landmarks the city they’re in are known for. It reminds me of a day I went with one of Sage’s aunts to the Smithsonian Institution Museum. We didn’t have much time so we briskly walked from exhibit to exhibit: “There’s Mr. Rogers’ Sweater…OK let’s go…There’s the Hope Diamond…come along, come along…There’s the carrier pigeon…OK we did it!” They enter a city with a checklist and then work their way through, sometimes stressing themselves out worrying about if they will be able to see all of the things on their list as if completing the list will ensure fulfilment.  This mode of travel may be for some, but I’d rather wander, spend time experiencing a place and seeing what the city decides to present to me.

In our trip we had a list of sorts. Daegan and I set up a Google Map on which we put anything we might want to see. There was no obligation or intention to see everything – or even anything if we felt that way. Instead, we would use these as suggestions – directions in which we could travel. If we found ourselves in a particular area and were looking for the next thing to do we could check the map we’d made to see what was nearby. It was a wonderful way to travel.

How many of us spend our life doing the same thing, rushing through, checking boxes off from marriage, to mortgage, to children. Some of us may take different paths looking for promotions at work, progressively nicer cars or fame and fortune. And as we attain them we take a photo, literally or figuratively, of the moment. “CHECK! DONE! On to the next thing.” I prefer to have the mental equivalent of the Google Map in my head – things I might someday want to do with one or two that I’m heading toward at any given moment. And even then, the goals are only suggestions. Training for a half marathon might end up at a running race, or it might end up not happening and a change of plans instead.

After we finish up at the museum, we head down to Greenwich Village. We’ve got a double espresso on our mind at a coffee house on our map. But then we pass Washington Square Park. Plans changed. We walk past a 50-something shirtless man with sparrows alighting on his fingers. In front of him is a sign asking for donations for sparrow feed. We walk past several kids in graduation cap and gown – it looks like high school graduation day was today. We find a stand and buy warm soft pretzels. The green grass behind the pretzel stand looks inviting and so we sit down. A nearby brass band plays versions of songs like “Eye of the Tiger” and Daft Punk’s “Get Lucky” that sound like John Philip Sousa wrote them as we play game after game of Seep. We read a little and take in the scene.

Daegan gets out his notebook and conte pencils again and starts to draw while I read my book.

We do eventually make it to the cafe and onward to dinner. But that really wasn’t the point after all, was it?

11 thoughts on “Checking off Boxes With Our Phones”