One day in 1980, a man arrives at my school and the entire fourth grade class is ushered down to the music room to see him. In his van he has brought instruments of all types. There are flutes, clarinets, trumpets, slide trombones, drums, and French horns. He takes each one out, demonstrates its sound a bit. I am impressed and excited. To be able to make music would be an amazing thing. At the end of his demonstration he gives us all a paper to take home to our parents, inviting them to rent an instrument for us to learn to play in the band.

I take the paper home and sit down with my parents. My mouth is going a mile a minute, so fast I can barely take a breath. I want a saxophone. I want to learn to play the saxophone. My cousin Bobby plays the saxophone and he can even play Boots Randolph’s Yakety Sax (Yes, Benny Hill fans, that one). I want to do that!

My mom stops me short: “You’re not very coordinated and there are a lot of keys. It will be too hard for you to learn it all. Why don’t you play the trumpet? That’s really easy.”

We go back and forth for quite some time until she realizes I am not backing down. There is no other instrument for me. And a few weeks later, a Conn Alto Saxophone arrives and I start lessons.

Yes, it’s a difficult journey. Learning the fingerings for the various notes isn’t too hard, but combining that with learning to control my breath, sit up properly, read music, keep a proper tempo, all based on musical notes I had to learn to read and it is a daunting task. But it isn’t long before I can play a few simple songs. And soon, all of us who got new instruments are joining the school band.

Between Grades two and four I have a bit of a rival at school. Michaeline and one of her friends would often pick on me, even ripping my coat one day (Horrors!) and I would egg them on by trying to gross them out at our shared table in class. But who should I be seated next to in band but Michaeline who, a full foot taller than me, played the larger, Tenor saxophone. There’s nothing like playing music together to bring friends together and it worked a charm. We would continue to be friends even to this day, nearly forty years later.

As I get better I start to get bored with the music we played in school and I all but stop practicing most of that. Instead, I buy sheet music at the record store for pop songs and play that and then start playing along with my records, developing my ear to where I could match the music as it plays.

Soon I’m playing school concerts and even march a few times with the band once I’m in high school.

As I got in to high school, it got more fun. One summer, Michaeline suggest I join her in the town band and we practice in the school once a week during the warmer part of the year. We march in various parades throughout Vermont and play in town greens (parks) including the bandstand in our own park. 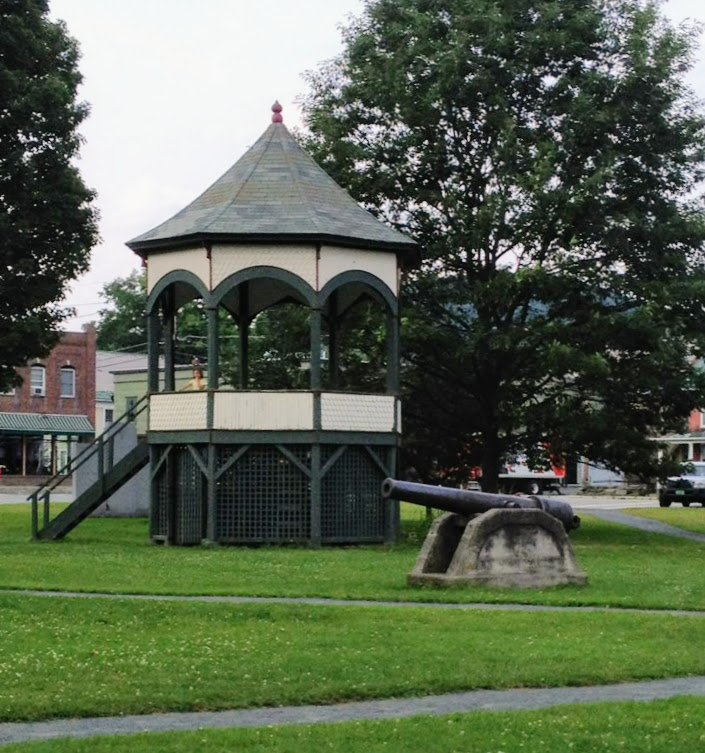 The entire band packs in to that small bandstand, some of us sitting up on the railings and we play everything from Sousa marches to excerpts from South Pacific to The Stripper. Once we discovered Monty Python, Michaeline and I beg the director every concert to play the Liberty Bell March – the theme for Monty Python’s Flying Circus. At the end of the summer, all of us get a cheque based on how many concerts and rehearsals we went to and our time spent with the band. Thus, I can now honestly say that I was, for a time, a professional musician.

You can see the band just a couple of years ago in the video below. Michaeline’s mom took over after the previous director passed on, and they’ve moved to a lower and more accessible bandstand but the feeling is the same. There are still the people sitting in their lawn chairs watching. I do note the absence, though, of some of the folks who would watch from their cars, honking their “applause” who were there back in my day.

In my last couple of years in school I am invited to join a jazz band loosely associated with the local law school. This is a huge thrill as I love the material and we play some interesting events. Our usual venue is the local pub and we play to large audiences until late in the evening. We play everything from big band classics like Glenn Miller and Duke Ellington all the way up to current jazz artists like Weather Report (it is the 1980’s after all!).

One day I skip school and only too late remember we have a concert with a special guest that night. My saxophone is in the music room and I’m not sure how I can get it without showing up at school. And then it occurs to me: I call the school, put on a British accent and leave a message for Michaeline. “Could you tell Michaeline that Ralph Melish needs you to bring his horn to this evening’s event, please.”  She would immediately know who it was as Ralph Melish was one of our favourite Monty Python sketches at the time. Sure enough, when I got to the show that night, there was Michaeline with a big grin and my saxophone in her hand.

Our guest, Big Joe Burrell arrives and he tells us about times playing saxophone with Duke Ellington’s band and how he would go from gig to gig in New York City back in the day. Michaeline and her mom have known him for years and I’m excited to finally meet him after hearing recordings and stories. Though Michaeline and I have never been nothing more than friends, Joe isn’t taking any chances. He motions for me to lean close to him and he says just loud enough for me to hear: “If you ever hurt her I’ll come break both your legs.”

Tonight I will play with true jazz royalty. The crowd that night is bigger than any we’ve had before and we have the time of our lives.

Soon after that I go to university, and I leave my saxophone at home. I play in the town band one last summer before putting away my saxophone forever. But rather than think of it as a slow fade, in my mind, I went out with a bang, playing with Big Joe Burrell who shook the room with all of the energy you see as he sings the song below.

Inspired by the Photo a Week Challenge offered by Nancy Merrill Photography. This week’s prompt was “Music“.

10 thoughts on “A Photo a Week Challenge: Music”