Yes, I know, I’m doing the Tuesday challenge on Thursday. I tend to be behind on these things as a general rule but lately I’ve been ridiculously busy as work life is heating up a bit combined with other errands: everything from fetching a Canadian passport to having a long overdue dentist’s visit. Believe me, I would rather have been posting this on Tuesday than getting my teeth cleaned.

In any case, this week’s challenge over at Dutch Goes the Photo is “Row” and I couldn’t pass up the chance to share more photos of my time in Varanasi.

In October 2016 I went on my first trip to India – a solo trip to a whole bunch of cities, but my favourite of all of them was Varanasi. My colleagues in Bangalore all thought I was crazy for spending almost a week there. “You can see everything in two days!” they told me. And yes, that’s true. But I feel like I could have spent months there in my little neighbourhood, having breakfast at the same place every morning, a cup of chai with new friends here and there, a nap in the afternoon that would always be ended by the man ringing his bell and singing out “Idliiiiiiiiiiiiiiiiiiiiiiiiiii” as he went down our narrow street selling his food.  The day would always end with a dosa or utthapam from the same shop in the evening. It was always somewhat small so I would go for “second dinner” somewhere else, but having a chat there and practicing my Hindi with the owner, Narayan, or “Chote Lal” as the neighbourhood kids would tell me to call him as they giggled.

Varanasi is on the holy river Ganges and boat rides at sunrise are not to be missed. One morning I woke up before 5:00 AM and met a guide who had arranged one for us. Most of the boats on the river at this time are human powered – rowed – with only a few boats using motors so it is extremely peaceful. 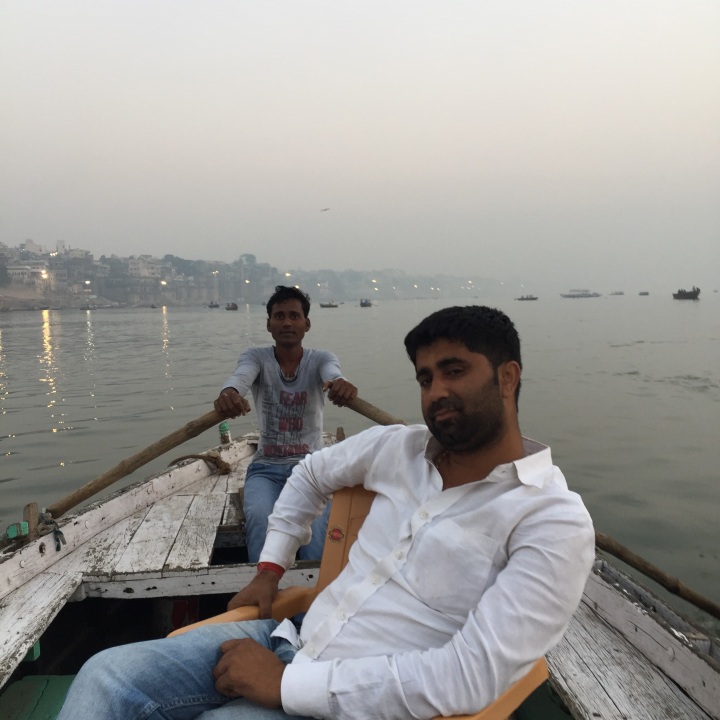 Our guide and the boat operator. This guide was arranged by the guesthouse we stayed at and he was excellent. He took us to many of the sights in the city and then arranged the boat in the morning. 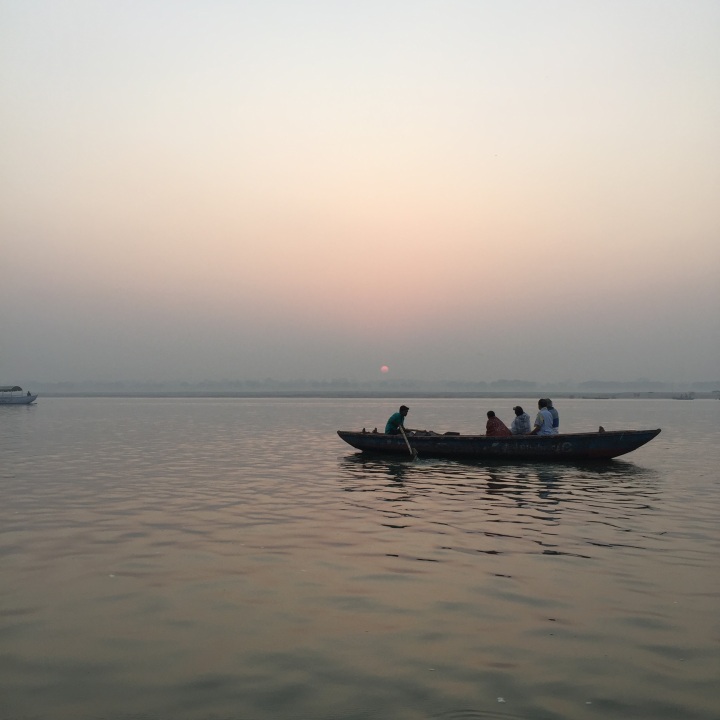 As you can see you’re never alone on the river in Varanasi but it is still quiet and peaceful. 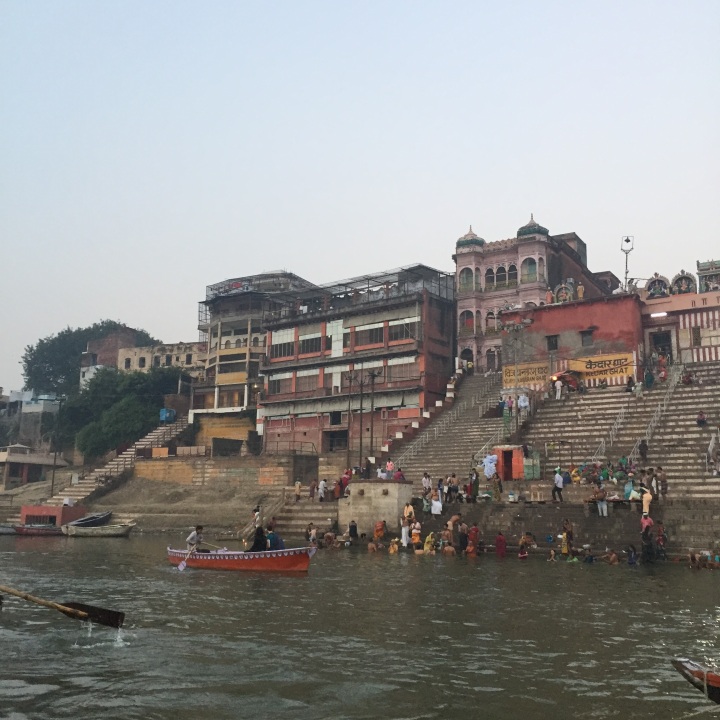 As the sun rises you can start to see folks waking up and bathing. Of course others have awakened much earlier – apparently the morning aarti ceremony happened around 3:30 or 4:00 AM. 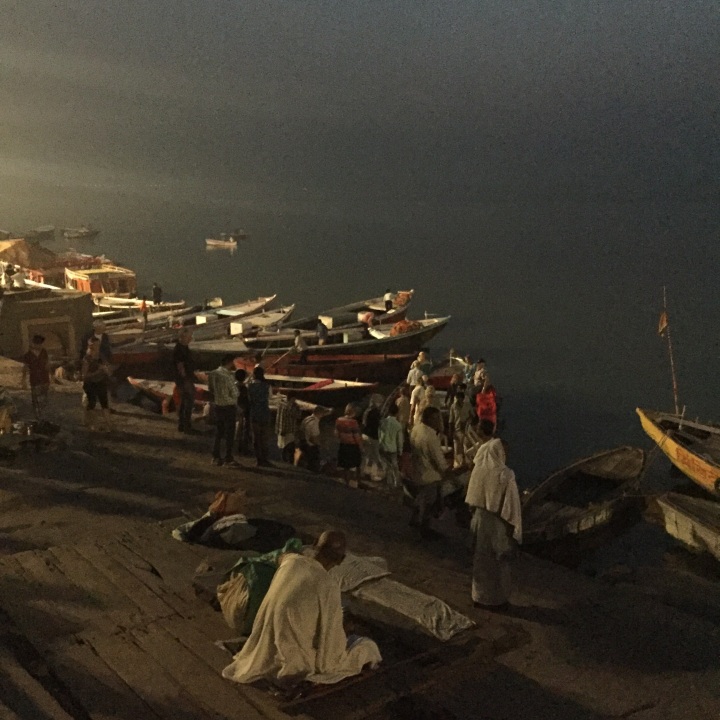 The evening aarti ceremony is at a more easily attained hour – just after dark. While some folks can see it from various places on the ghats, others hire boats and watch from the water. 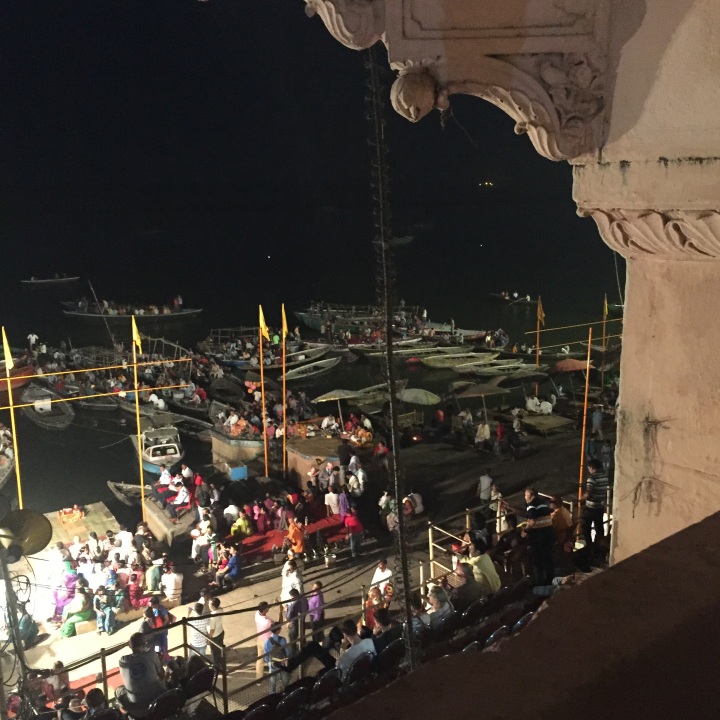 I hope to make it back to Varanasi someday and am a bit disappointed I can’t take Sage to visit in January when we go – there just isn’t time this trip. On the other hand, it’s a good reason to invite her back for another trip.

Are you interested in more about my visits to India? I’ve indexed all of them from one page. You can find them here.