In many parts of the world, the “night market” is a place to go to try interesting street foods. The places are usually packed with people all searching for amazing snacks and sweets. For Americans, perhaps the closest thing would be the midway at the county fair where you can get delicious fried and sweet treats. These photos, for example, show some of the midway at the Tunbridge World’s Fair in Vermont in 2008. 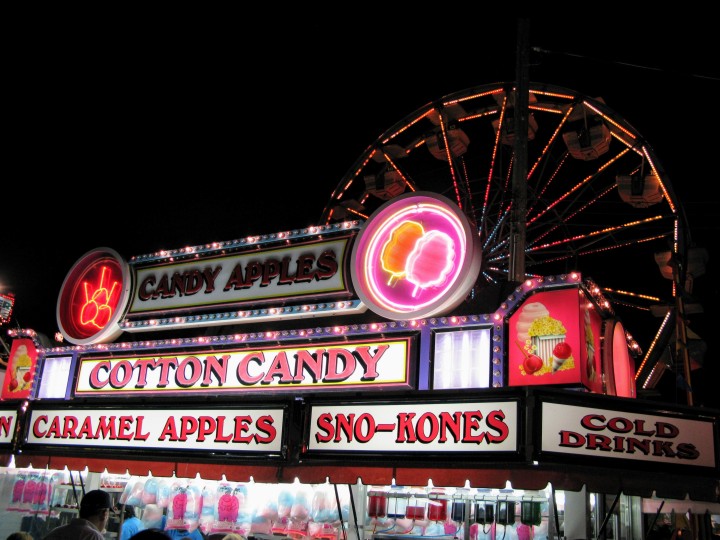 But depending on where you are it can look different. In Jaipur, at Masala Chowk it looks like this:

Here the stalls offer different specialities but the same theme: delicious.This one was making jalebis. Again, my North American friends will have to imagine funnel cakes but ten times more delicious – sticky and crunchy and sweet all at once. 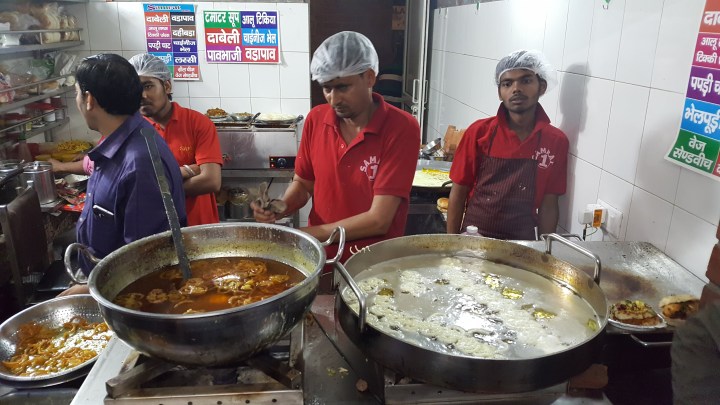 In some markets, in parts of southeast Asia I’ve heard you can find more exotic things like insects on skewers.

The phenomenon came to Toronto some time ago. About ten years ago I went to my first one – it was a good distance outside of town in a suburb called Markham with a large Chinese population. Daegan and I went up there to see what we could see.

The first thing that hit me when I arrived was the smell. There was the smell of fried foods which was delicious – but then, when the wind was right, there was a really bad smell that made me think a little of garbage. I wasn’t even near the food stalls yet so I couldn’t figure out what it might be.

We started off simple with fish balls. They were good but not terribly flavourful. 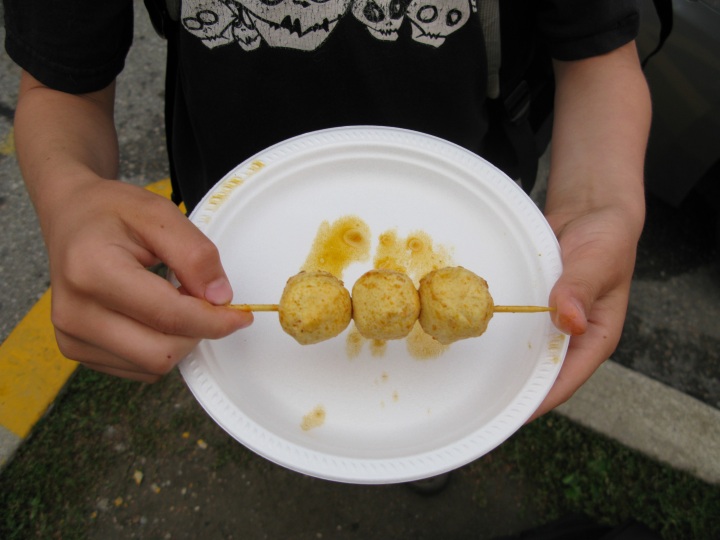 One stall sold duck neck. I found it to be a lot of work to get a very small amount of food. Daegan, on the other hand, loved it to the point that he remembers it fondly to this day.

My favourite, hands down was the murtabak – a bread stuffed with curry similar to a Caribbean roti. The bread was delicious and the curry perfect. 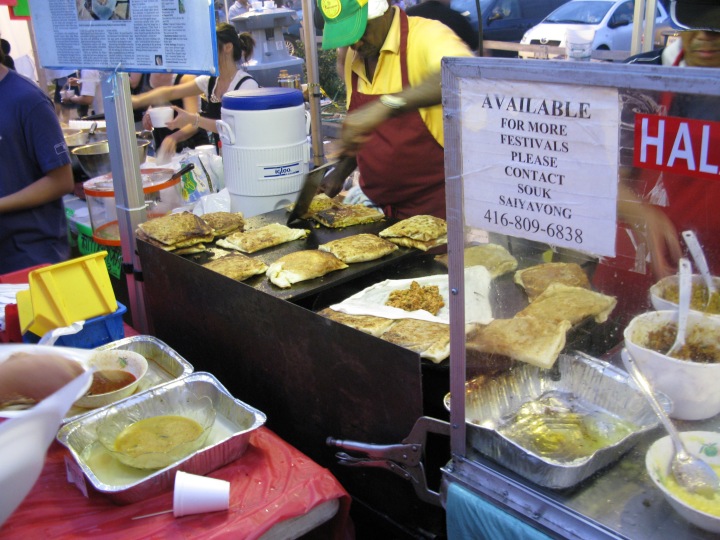 We tried it with both available sauces: peanut and chilli garlic. I was a big fan of the chilli garlic, of course.

We walked a bit further and saw one stall with an enormous line. This stall, coincidentally, turned out to be the source of the bad smell. In it they were deep frying “Stinky tofu”.  This is tofu that is fermented with a starter bacteria until it has a really ripe smell. You can see it being deep fried below – no doubt deep frying puts the smell in to the air.

I didn’t try the deep fried tofu this time but did at a later date. Like smelly cheese, once you get it past your nose it isn’t bad. But it wasn’t that tasty either. I wouldn’t be having it again.

I did try it that night in a soup. This soup had pork blood, intestines, smelly tofu, and lots of chilli oil. It was actually pretty good. Not something I’d order all the time but interesting. The blood didn’t really have a taste but you can see its colour. The intestines were chewy. The stinky tofu lost most of its smell and flavour in the soup.

Over the years I’ve been to several and they’re working their way downtown now. On Sunday Sage and I decide to go. Because I have Hindi classes in the evening on weekends, we went during the day – they opened at 2PM.

Today’s market is much closer to downtown – at the site of the old Ontario Place amusement park. The park is closed but the island is being turned in to a public park as well as an event space for things like this. On a hot day like today it was a relief to find ourselves right next to the water. 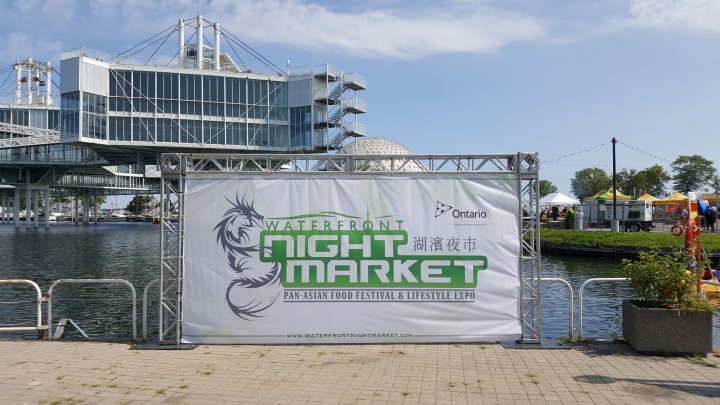 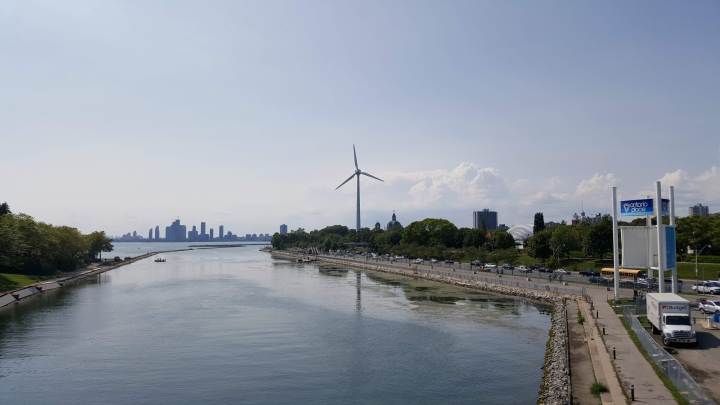 As we approach the island where the market was we can see the stalls in the distance.

When we get to the other side we arrive in an area with a lot of dessert stalls. Neither of us is particularly interested in sweets now so we take no notice. Except start to notice something. There’s a bad smell coming from somewhere. It takes me a few minutes to find the source. In this market there are several stands selling stinky tofu. This helps keep the lines manageable for sure. 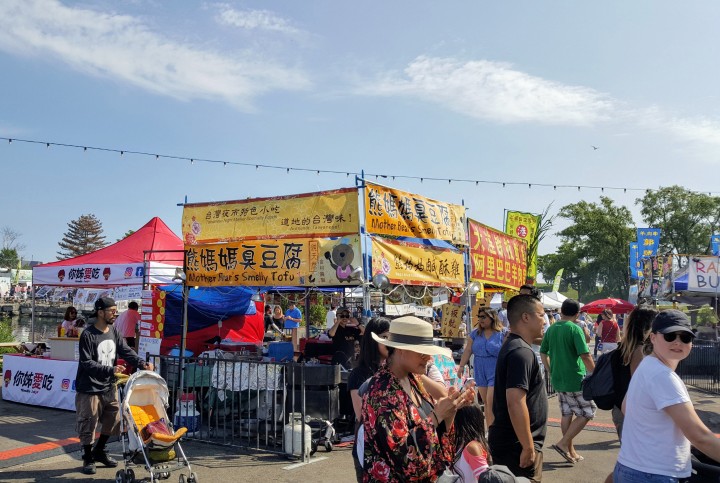 We take a bit of a walk to see what our options are: 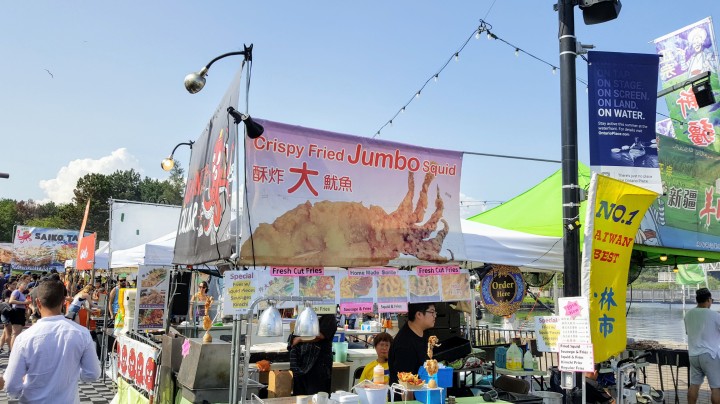 One thing we saw at this market that we didn’t at previous ones is the presence of different fusion foods. We pass a stand selling Thai style cole slaw and butter chicken rolled in Chinese pancakes. After a wander through all the stalls we get in line for some Vietnamese-inspired tacos. 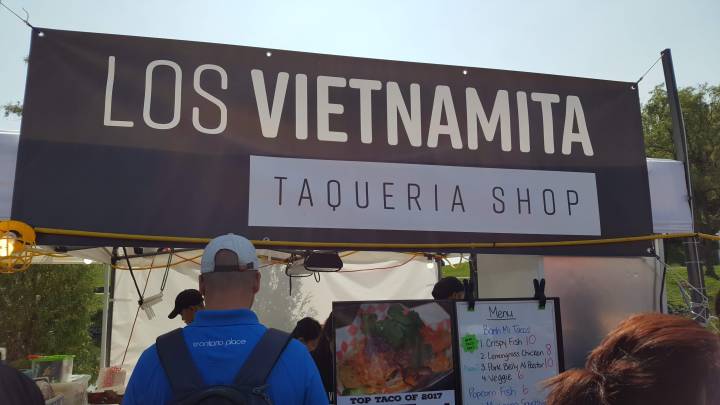 We start with the “Crispy Fish Banh Mi Taco”

It has many of the ingredients I recognize from Banh Mi sandwiches: pickled vegetables, meat (or fish), chilli, and coriander. But there’s also lime for the fish and it’s served on a freshly cooked tortilla. It is the best combination of the fish tacos I had in New Mexico with the banh mi I have had downtown. It’s so great we go for another.

This time I go for the lemongrass chicken version. Chicken with lemongrass is the first Vietnamese dish I ever tasted and it’s a huge favourite. The chicken is juicy and tender with a good level of lemongrass. All in all it is very tasty but it could have done without the mayonnaise. (I think this is possibly a Toronto thing – even most of the burrito shops offer “burrito sauce” on their burritos – basically mayonnaise. Who eats a burrito with maynnaise?) I leave most of it with Sage and head out to get something more. 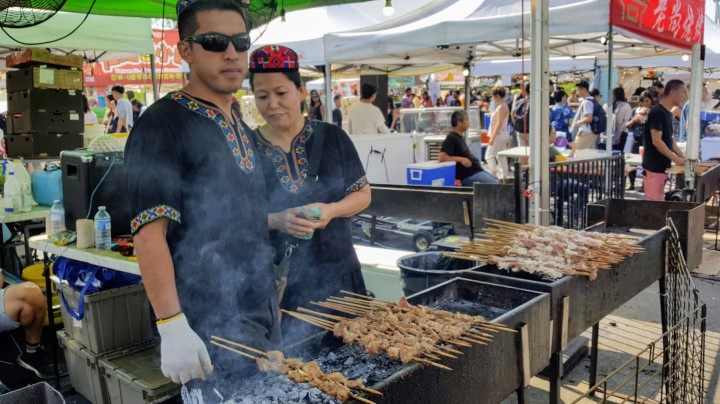 Most North Americans have a fairly limited idea of what Chinese food is. The usual fare available at the average hometown Chinese restaurant includes sweet and sour chicken, maybe General Tao’s chicken, pepper beef, and egg rolls. But there is so much more. Some know about other dishes like Sichuan style food or dim sum. But I only recently learned that in the west of China is a large Muslim population and many of the dishes there are similar to what you might find in the middle east. For example, grilled lamb skewers seasoned with cumin and chilli are very common and becoming more common here in Toronto as well. I order two for myself, knowing that Sage is not a fan of lamb.

They’re OK but fairly fatty and much more food than I thought. I would’ve been fine with one, I think – especially considering that I was eating these alone.  Back out I went. This time I brought back a Chinese bun. The bun was cooked in a clay oven very similar to a tandoor. The bread was similar to naan and had seasoned pork, chillis, mustard greens and other vegetables in it. It was really delicious.

As I walk I see many people carrying grilled squid on a stick. I’m a big fan of seafood but squid is a little chewy for my liking. But I’m clearly in the minority today.

I head out again and go to a couple stalls before returning to the shady spot Sage has staked a claim on. I go to a stall selling Korean food with a choice of various pancakes, pork, and boneless fried chicken. I order some hoping for some spicy karaage chicken. What I get isn’t bad but is just fried chicken. The bibimbap sauce on top provides a little flavour but is not the fiery bite I am hoping for. 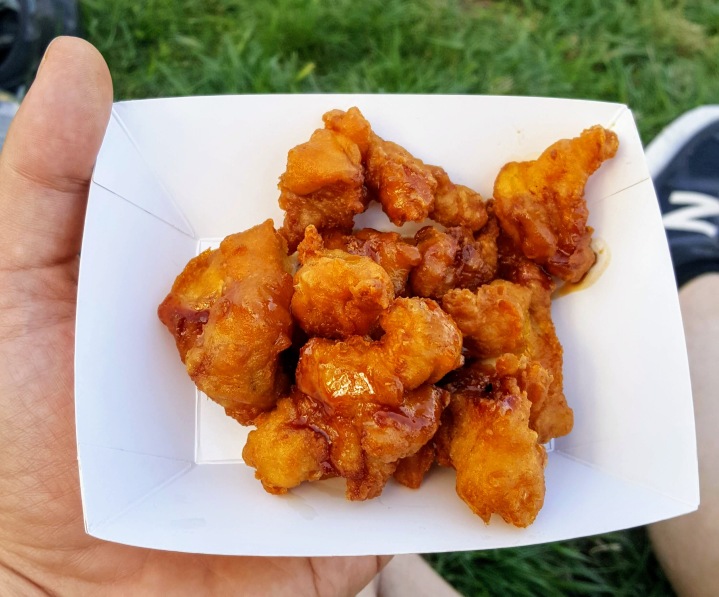 The next dish I pick up is a cold Sichuan noodle dish. This is just the sort of thing I need on a hot day like today. The noodles are cold and cooked well with an al dente bite to them. They’re served with julienned cucumber, a couple of slices of sausage and a generous dose of spicy Sichuan pepper-infused sauce in the bottom. It was really really tasty but still not as spicy as I was hoping for. There are only a few places I know of that manage to make it that hot. I may have to go back to one of them sometime soon.

By this time we’re both overheated and stuffed to bursting. We head back and for a change of pace catch the commuter train downtown that is just arriving. We join a number of families from the suburbs heading downtown for a baseball game so the train is pretty full. We don’t mind, though. It is air conditioned to near-extreme levels. We are finally cooled off by the time we pull in to Union Station.

9 thoughts on “Appreciating My Own Backyard #6: “Night” Market”