Yes, I know: Tuesday’s a long way off seeing as it’s already the weekend. But there’s still time to get my entry in for this week’s Dutch Goes the Photo challenge on the subject of Lift. 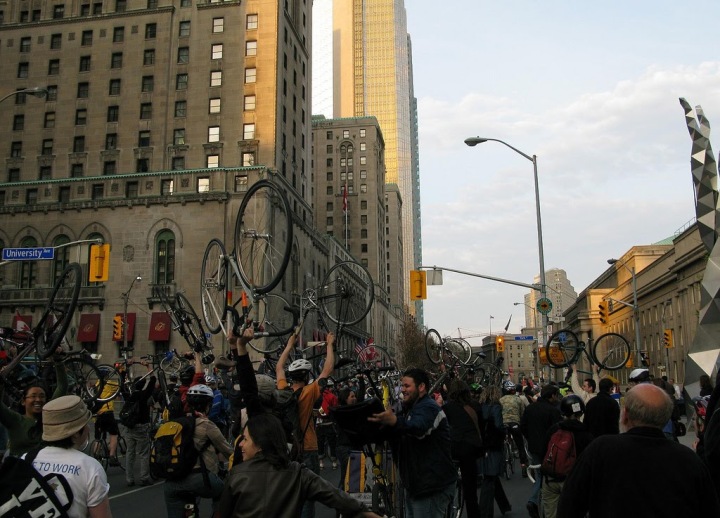 Not long after I rediscovered cycling in 2007, I discovered Critical Mass which, at the time, was a pretty big event in Toronto. This was a monthly bike ride that was officially organized by nobody. It was just understood that people would meet at the corner of Bloor and Spadina at 7:00 PM on the last Friday of the month. In the summer, 300-400 people might show up. With that many people, the entire traffic lane could be taken up by cyclists for the length of a city block. Riding in the middle of such a group felt incredibly safe and so it became something of a rolling social event with people “mingling” by changing position in the crowd. There was no set route. The people in front would just choose where the group went and the rest of us would follow. To keep the group together, the contentious practice of “corking” intersections – blocking traffic while the whole group went through an intersection regardless of whether the signal was red or green (as long as the group started through the intersection when it was green) – was taken. Mostly, though, reactions from others including drivers was bemusement at seeing so many happy cyclists, some playing musical instruments, others in costume, riding by.

Occasionally, in a fit of joy brought on by feeling relatively safe on the roads because the power dynamic had flipped, the group would stop in an intersection and raise their bikes over their heads. The photo above captures that moment.

In Toronto this ride seems to have petered out a bit. On one ride (that I didn’t go on), the entire group found its way on to an expressway and stopped traffic there. This changed the attitude of law enforcement toward the ride and it was much more heavily policed with a contingent of bicycle cops often joining the group and making sure the group stopped at lights regardless. This broke the group in to pieces and created a bit of an adversarial tone. I haven’t been in almost a decade now but I look back with great fondness on the days when it was mostly unnoticed in the city.