A person who just came to this site this week might think our family eats almost exclusively Indian food but really, our preferences are a bit more broad than that. As I described it to someone recently: we like big flavours – flavours that make you gasp with excitement the first time you taste them. It might be the flavour of a Panang curry, or the deceptively named “Water-boiled fish” from Sichuan province in China that is not just flavourful but filled with chillies and Sichuan pepper that makes your mouth a little bit numb. It might be a rasam from South India, or it could be a salsa from Mexico. If the people of a country love exciting and bold flavours chances are we love their food.

Of all the dishes on our menu at home, I think Refried Bean Burritos is probably the one we cook most often. I’ve done it so many times I can do it in my sleep and it is really satisfying. We probably have it 1-2 times a week.

Tonight I had some tomatoes and limes to use up so not only did I make the usual burritos, I made a pico de gallo salsa.

First, I measured 2 cups of pinto beans and put them in a pressure cooker with 8 cups of water and a bay leaf. Had I planned better I would’ve soaked them but I rarely plan that well. And so I bring the cooker up to pressure and it for 27 minutes. You can use black beans as well and cook them by the same instructions.

I left the pressure cooker in the kitchen and went out to the living/dining room. We’d just rearranged this weekend and I moved our kitchen island that used to sit just outside the kitchen over to the window. Our kitchen is windowless and dark, but this spot has a nice view and gets a lot of sun. 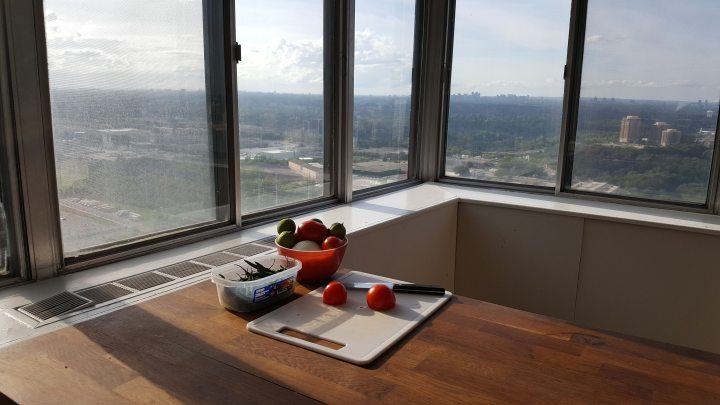 While the beans cooked, I seeded and finely chopped the tomatoes 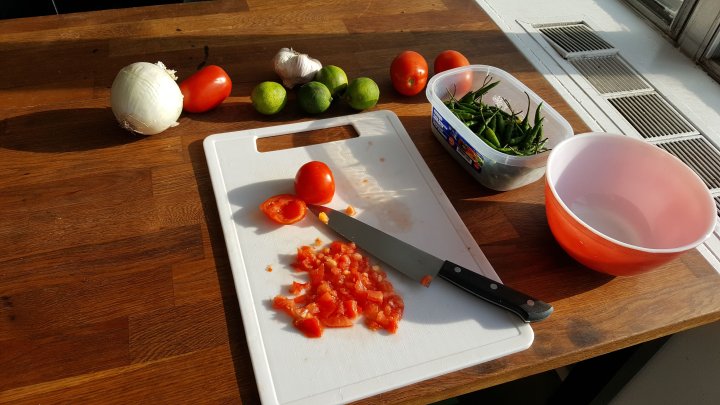 Then I finely chopped some onions. 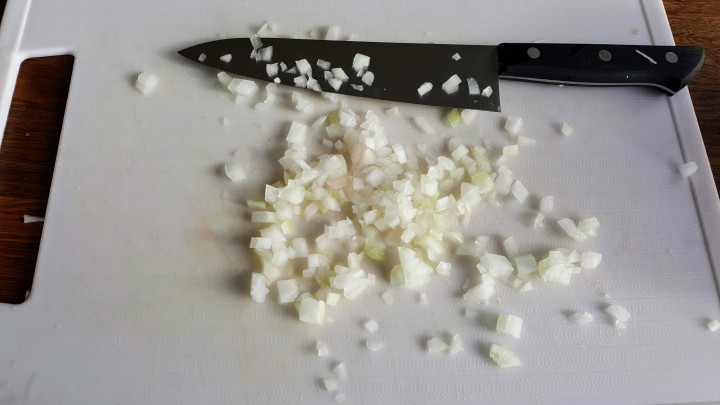 I mixed the onions in to the tomatoes until it looked like this (sorry – I didn’t measure, I just went by sight) 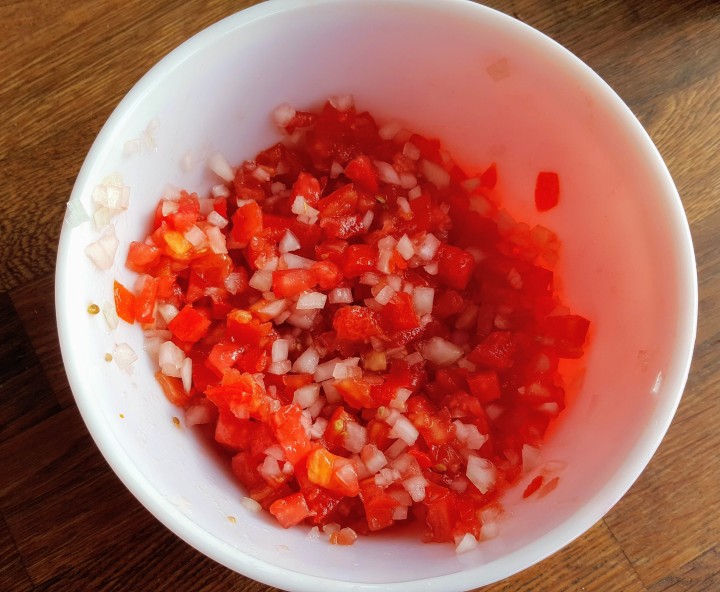 Then I added about 3-4 cloves of garlic, 3-4 green chillies (I would’ve used jalapenos but we seem to be out), minced cilantro (coriander) salt, pepper, and lots of freshly squeezed lime. 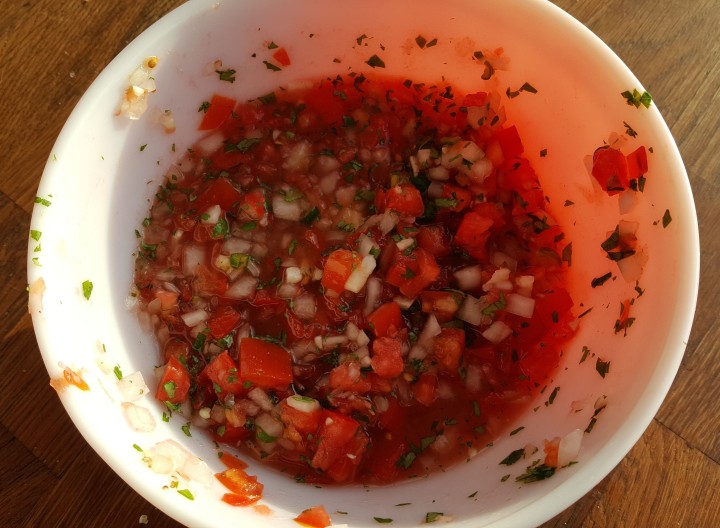 It took about 30 minutes to put this together and probably would’ve taken much less had I been more efficient.  By the time I put the pico de gallo salsa in the fridge, the beans were ready.  I drained them but saved a couple of cups of the bean cooking liquid.

I heated some olive oil in a pan and added a chopped onion. When they turned clear I added garlic (maybe 3-4 cloves) and cooked until it smelled good. 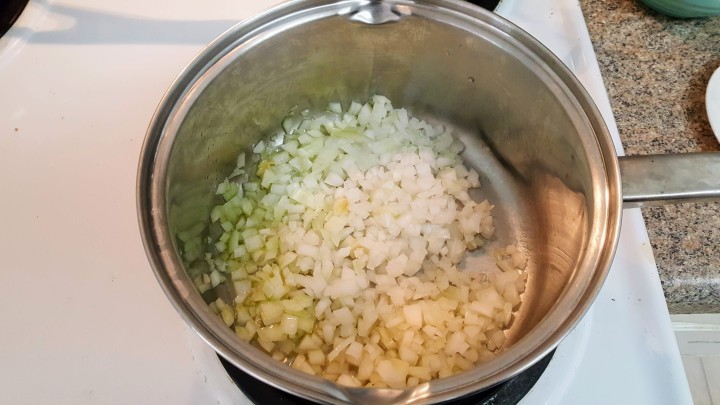 Then I added spices: 1 TBSP cumin, 1 TSP each of salt, pepper, and coriander powder, 1/2 tsp each of oregano, basil, and dill. 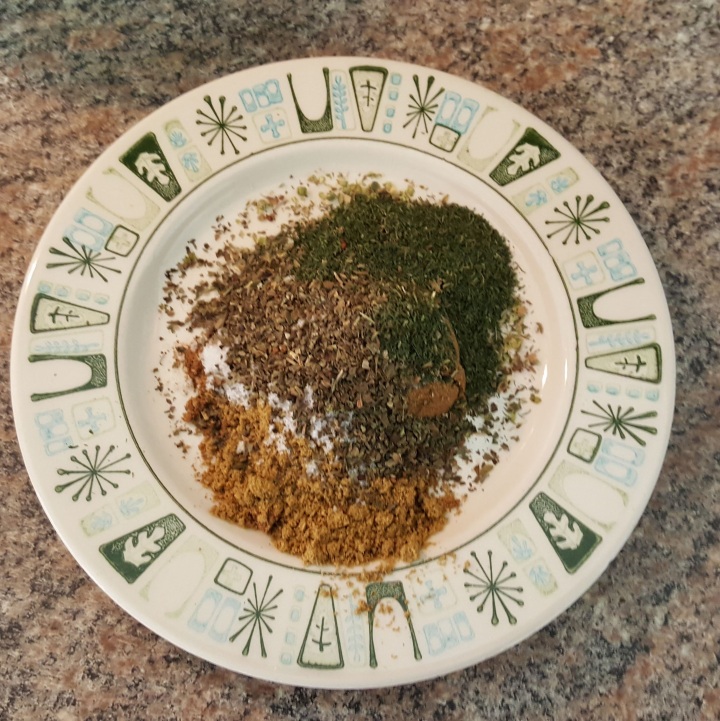 After that you add the beans to the pan and a bit of the bean liquid and mash. 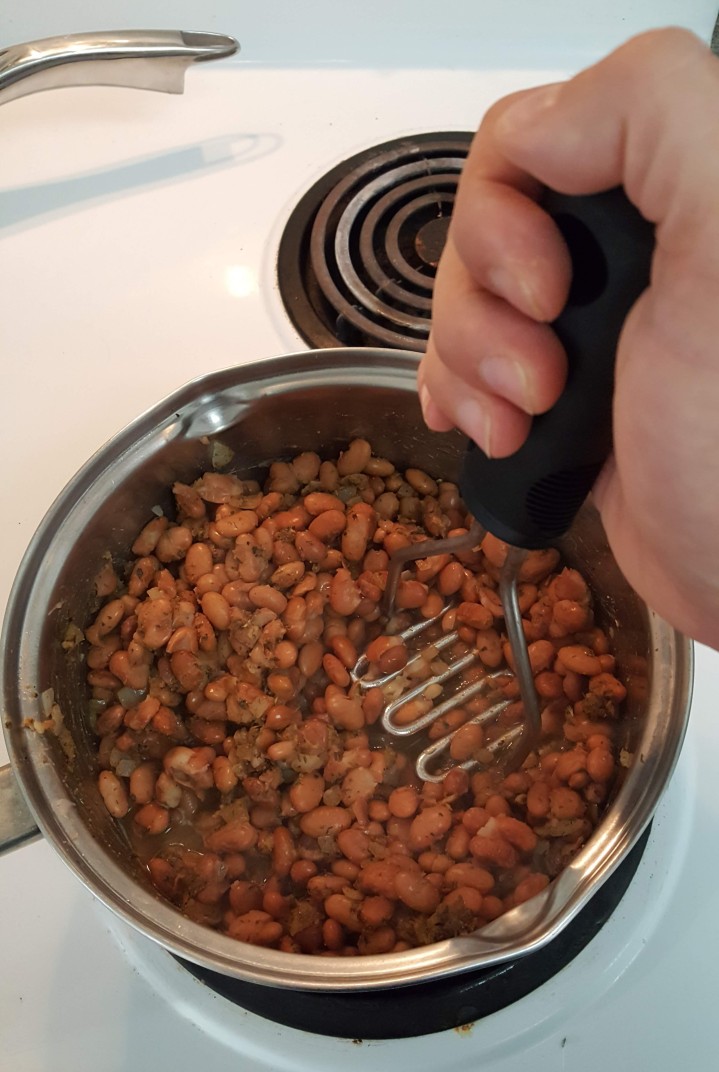 Continue to mash and add liquid until you get a a thick paste. How thick or thin is up to your personal preference. Even in our family we have some who like it mostly dry with just beans completely mashed and enough water to make it stay together while I like it a bit thinner. Still not so thin you could pour it or use it with a ladle but maybe the consistency of thick yogurt. Had I remembered I would have taken a photo of the final consistency we had. But as it was I was hungry and so I took the mashed beans off the burner and put a frying pan on. I used this to heat some of the flour tortillas we bought. This makes them soft and pliable – and they are much more appetizing when they are warmed rather than cold from the fridge. Then I add the beans and roll it up and top with pico de gallo. This can be made as fancy as you like, though. I often use lime-cured shredded zucchini or summer squash inside for more veggie goodness. Those of us in the house who can eat cheese (i.e. everyone else) will add shredded cheese to the tortilla before closing it. The heat of the beans will melt it beautifully. And on top if we have it it’s also very good to have any or all of the following: salsa, sour cream, guacamole, fresh cilantro, chopped green onions, New Mexico green or red chile (or both!), or go crazy and put all of it on, add more cheese to the top of it and bake it for a minute or two until the cheese is hot and melted. 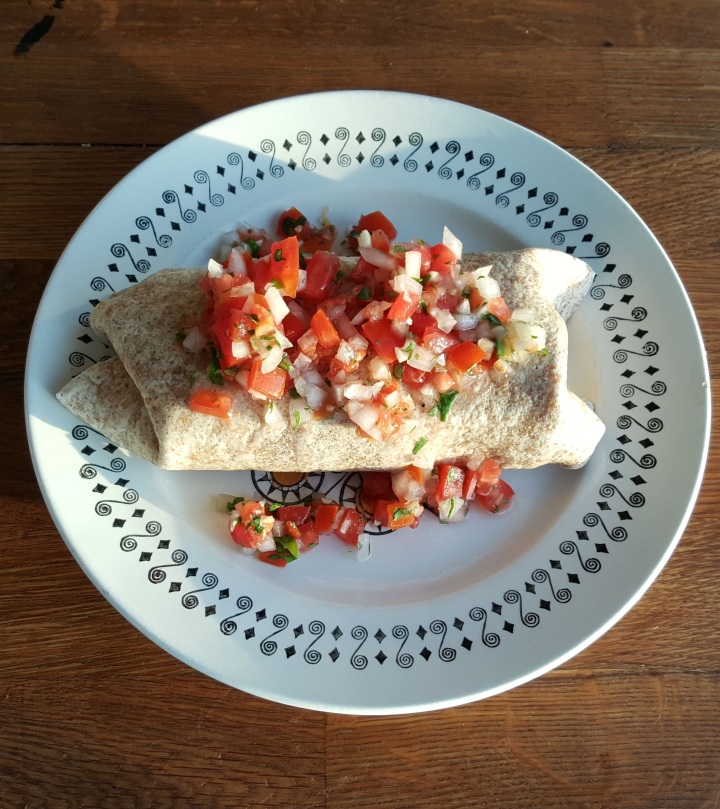 As I was making this I was thinking about how much like language cooking is. Languages all have words for the things we share in common: I’m sure every language has a word for the sun, moon, or a smile. But I notice that there are lots of common things in the “language” of food. As I cooked this dish I realized the same is true for this. So many cultures have a “mash beans and eat with some bread” dish. In North Africa a dish called Foul Medames was invented (some say it goes back 2,000 years to Egypt but now it’s pretty widespread around the Mediterranean. This is a dish of fava beans mashed with spices and garnished with onions, peppers, tomatoes, and a dollop of yogurt. One of my favourite versions comes from Ethiopia and is available for breakfast at Lalibela Restaurant in Toronto:

One of my favourite #vegetarian #breakfast foods: Foul. Lalibela makes one of the best I've had. Deliciously spiced fava beans, fresh tomato, onion and jalapeno and crusty bread. So #yummy

Mash some chickpeas with tahini, garlic, spices, olive oil, and lemon juice and you have hummus that you often serve with bread. I’m sure if I dig further there are many other common mashed bean dishes around the world.

Many cultures also share the idea of putting something delicious inside of dough and cooking it (frying or steaming). Pupusas, samosas, pierogis, momos, dumplings, mandu (or mantu), and on and on. There are differences between them but at their core they’re basically the same. Just like us. Perhaps we really are what we eat.

Edited to add the following: