A week ago (or was it a decade ago – it seems so far away), we were finally packed. Four panniers, together weighing about 50 lbs sat in our living room and it was time to load them on the bike to have our first ride around the block to see how the bike ran when loaded. We headed out onto some residential streets in Toronto and that was when I got nervous. This bike was heavy. After a kilometre or so we headed home and I started to wonder what this whole trip was going to be like. Fortunately for me, once I got out of the sun and could think properly again I figured out what went wrong. I was trying to pedal this bike in my normal style – relatively quick acceleration and relatively quick speed. Perhaps riding more slowly – driving it like the transport truck it was instead of trying to push it like a little European sports car would make the difference. I crossed my fingers that this would be the case. Meanwhile, my partner, Sage, was rolling her eyes: “You always feel this way before a big ride and you always have an amazing time.” Daegan, also, was unfazed. And really, with all this positivity around me how could it not work out?

Day One:
I hadn’t had a night’s sleep like the night before this ride started since I was about six and it was Christmas Eve. It took forever to fall asleep, and finally, at 4:45 AM, there was no more sleeping for me. I started the coffee and the final packing. Daegan woke up a few hours later as excited as I was. We both had a bit of breakfast which I had to force down as the excitement made it difficult to eat. After two big rides in the past couple of years I’ve become used to that. I choke down a few bites of food to fuel me for the first little bit and then after a couple of hours I’m usually ready for a real meal. 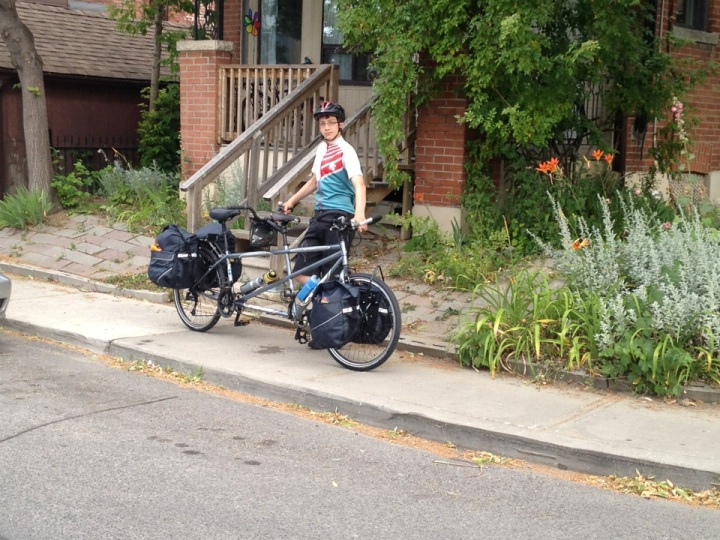 By 7:30 AM it was time to leave and we headed out. Remembering my idea from the previous day we took it nice and slow, heading down a relatively quiet Bloor street. Instead of getting tired right away, everything seemed fine. And before long we had gone 20 km and it was a good time to have a bit of breakfast. By now we were in Scarborough, one of the inner suburbs of the city and we were ready for a break from the traffic of Kingston Road. And so we loaded up on french toast, eggs, coffee, and fresh squeezed orange juice before heading back out on the road.

Shortly after breakfast we picked up the Waterfront Trail. Here it was a path leading along the shore from the eastern edge of Scarborough out through beyond this day’s destination, Oshawa with a few detours onto quiet residential streets. As soon as we hit the trail it seemed a good time for a break, a snack, and some shade. So we ended up sitting for a little bit on the beach.

The rest of the day led us in and out of several Canada Day celebrations including one that closed the trail for fireworks setup in Pickering but it led us down a street that brought us to this person’s bike – which appears to be one way of carrying all of your gear around.

The 70 kilometres to Oshawa went very quickly and before long we found ourselves at our first host`s home. By then the day was pretty hot and we were ready for a break.

Once we`d showered – we pretty much keep to ourselves until that happens, no need to subject our hosts to the sweaty messes we are when we arrive, I sat with Michael, our host and got to know one another. Once his partner arrived, though, we headed out, along with their 3 year old daughter to stop at a store and then off to Parkwood Estate, the former home of the owner of GM Canada. What an unbelievable extravagance that place was. Though it was late and we couldn’t go inside, just the grounds themselves were immense and filled with beautifully-groomed plants, pools, statues, and fountains. It was so extravagant that when the family donated the house and grounds to the city of Oshawa, the city had to get help from the federal government to maintain it because the expense was too high even with revenue coming in from weddings and film shoots (X-Men, anyone?)

That night we had dinner with the family and heard the most amazing stories of their time just before their daughter was born hitchhiking throughout the east coast of Canada and visiting the tiny villages on the south side of Newfoundland, most of which are only accessible by boat (which they hitchhiked to as well). In the month or so they travelled this way they met so many wonderful people I feel like a seed was planted for next summer’s trip…