We leave our driver’s village,  and head further west. The population is thinning even further. There’s hardly any traffic now other than a few animals and people carrying large stainless steel pots of water on their heads. Occasionally a small village appears and just as quickly disappears behind us. With the population so low and streets so calm I start thinking seriously about bringing my bike next time I come here. This would be an amazing place to ride through. Kyle, one of the two people traveling with us remarks how much this area looks like East Africa. Meanwhile, I’m thinking to myself that it also looks much like the desert southwest of the US.

Eventually our driver speaks up and asks if we want lunch. It’s our last chance for food until we leave the lake.  Speak now or forever hold our peace. We are too excited and decide we’re not ready to eat – but a snack would be good. We stop at a small roadside restaurant / convenience store that, were it not for the typeface, might seem like we’d teleported to western New Mexico. 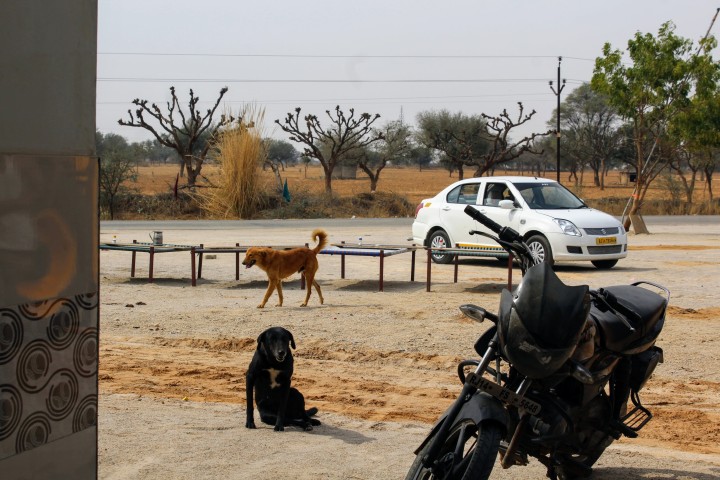 Filled up on tea biscuits and salty snacks we continue on.

Our driver has not been to the lake before so as we approach the lake he begins stopping random strangers asking how to find a place for us to see the lake and maybe take some pictures. Nobody seems to know anything specific but we’re guided in a general direction.

Eventually we see the lake and next to it a number of concrete buildings under construction. We drive down the long driveway to a place where a bunch of trucks have clustered next to the buildings and start walking. Our driver tells us that we just missed a film shoot in the area but we should be able to look around here. The space we have found ourselves is a resort under construction. As we walk toward the shore we see workers bustling around and more trucks pulling in. Eventually an officious man in a button down white shirt comes down and speaks to our driver in Hindi. I pick up a bit of it: The space is booked completely for others and we’re not allowed here. We need to leave immediately. No, he doesn’t know where we can go to see the lake. We need to go right now.

Back in to the car we go and our driver takes us a few hundred metres north to a spot where there are just a few small lean-to’s set up near the shore. There’s signs that people live there but either they’re gone now or inside sleeping through the heat of the afternoon.

We get to the shore and though we knew it was coming it was still startling. There is no lake. At the moment it is dry. Sambhar Lake is full of water in the rainy season when it becomes a major stop for migratory birds including flamingos, but it’s been a while since there has been any significant rain.

I head out in to the lake to explore and I immediately become aware of something: We are most definitely between seasons. There is clearly no water or migratory birds, and there are also no front end loaders packing salt in to rail cars. And soon I see why. The further out I walk the more I sink in to the slushy salt. Water begins to fill in my footprints. Reading my mind our driver calls out to me, warning me that it could get deep.  With only a few people around to save me and the only sounds we hear the whistling of the wind, I don’t want to find myself having to be rescued from salty quicksand and I turn back. 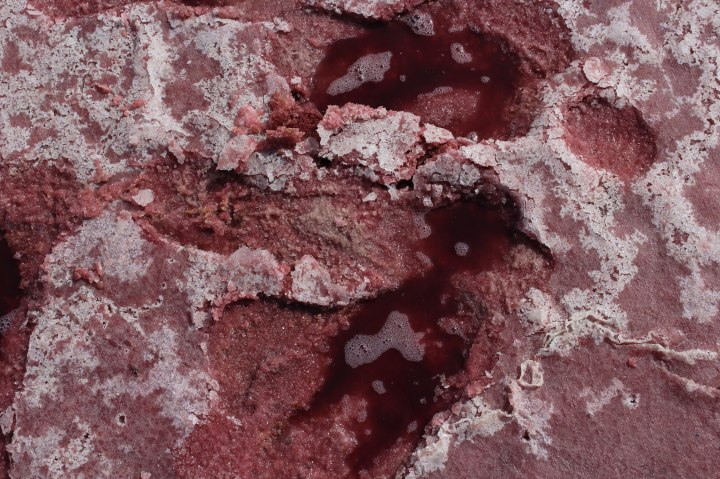 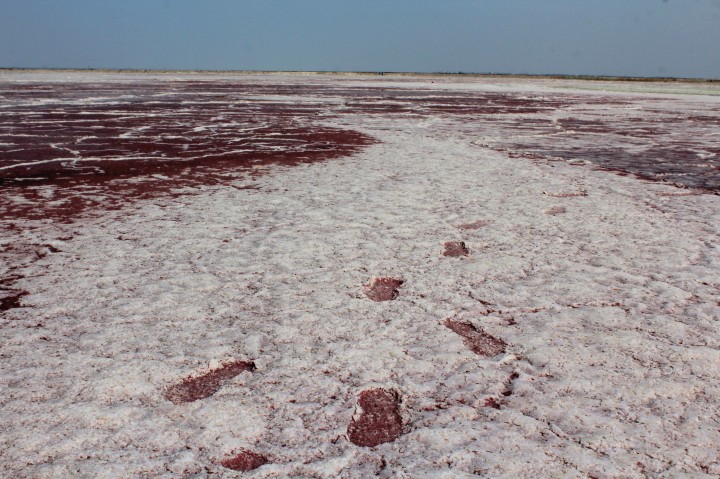 Eventually all of us sit at the edge of the lake and enjoy the silence – something we didn’t get much of in Delhi or Jaipur.  Soon, there is the distant sound of a motor approaching.

Dislodged from all of our individual thoughts we head back to the car and decide to search for where the salt is processed.  Our driver asks a few more strangers and eventually we are in a bit of an abandoned industrial area. We find a large pile of salt and nobody around. 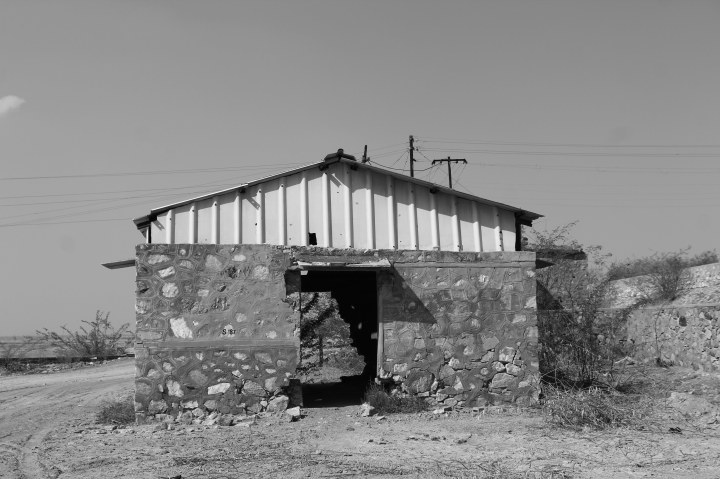 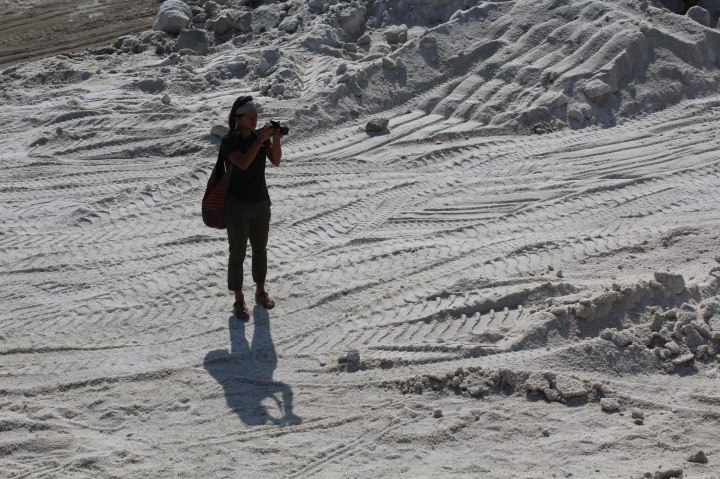 We climb to the top of one of the massive piles, much more solid than it looked and looked around. There was almost no sign of other humans around for miles. The only thing breaking the illusion that we were the only people on earth was a single driver out on a salt flat racing around and doing donuts way off in the distance.

We get back in the car and head for what appears to be a factory. There are many train tracks and lots of piles of salt. This must be the place. 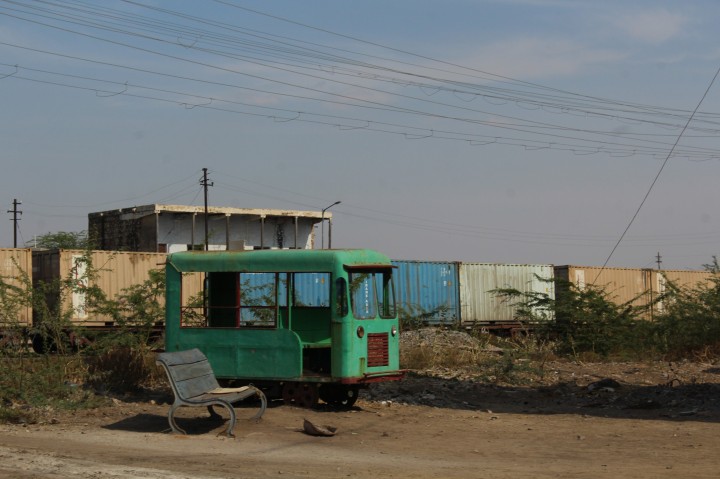 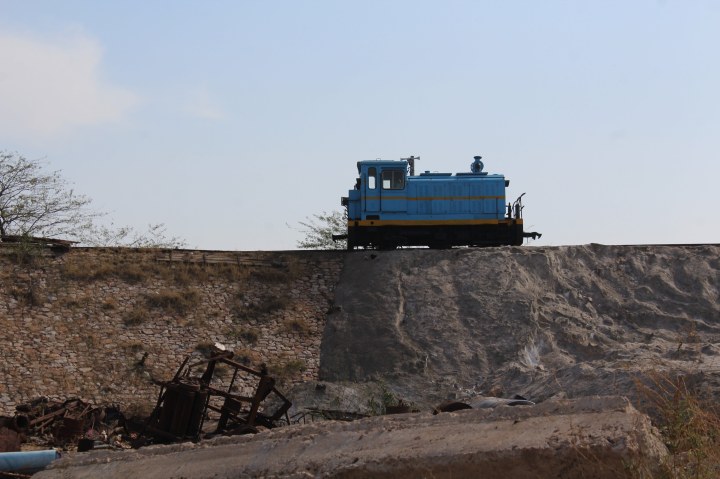 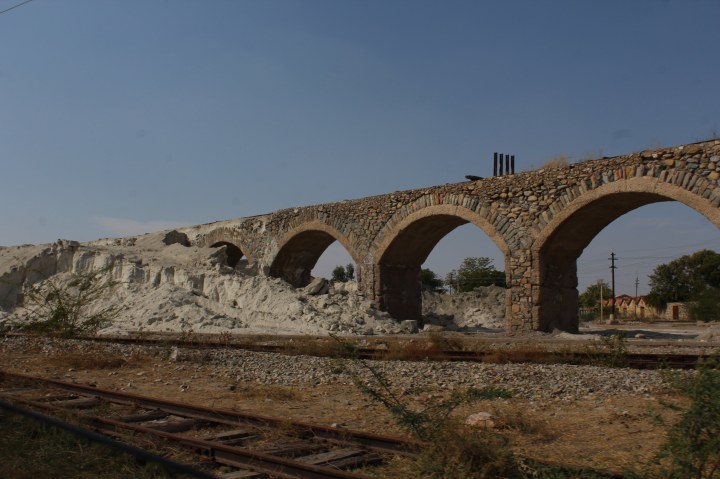 Finally we get to a small building where a number of men are sitting outside. Our driver asks if we can continue inside and we’re told we can’t drive but we can walk. We’re tired and don’t want to walk so we tell them “It’s OK, we’re good.” and prepare to leave. But then they change their mind and say “Go ahead – you can drive through – but no photos, please.” and we drive through the processing area past many piles of salt, large buildings and excavating equipment. As soon as we leave the men behind, our driver encourages us to take photos anyway – but we don’t – it feels a little wrong. Finally, we head back out and thank the men for letting us in.
Now we’re all hungry and our driver takes us to a place on the streets of the first village we come to. Like many restaurants in the area the cooking area is outside. It’s such a beautiful day out we all decide to sit outside as well. 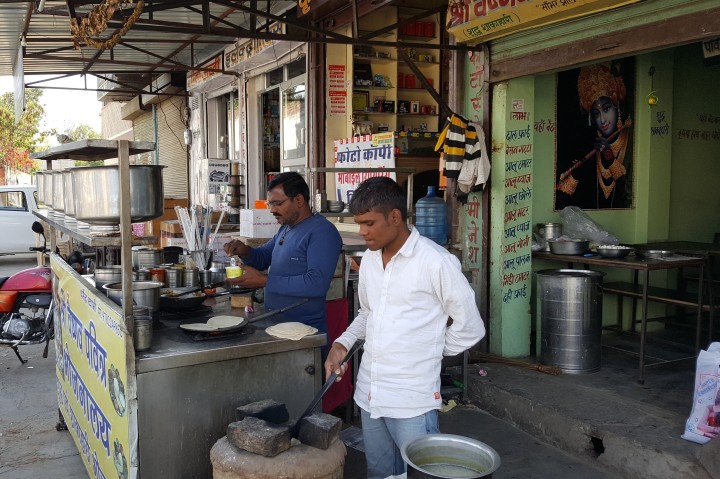 We’re given plates of dal fry, matar paneer, and mixed vegetables, rice and chapatis. As soon as any of our plates is empty of chapati, a new, freshly made one is brought over until we insist we are completely full. Each of our meals costs Rs 100 – about $2 Canadian but is as good as meals I’ve paid 10 times that for.
Filled up, we head back. Traffic has picked up and I think our driver is in a hurry to get home as we’re going quickly now. Driving in India is very different than in the west. There’s lots of passing and jockeying for position, and lanes can be seen as a guideline sometimes. We are making great time and are passing nearly everyone we meet, heading in to oncoming traffic, sometimes only returning to our lane when the oncoming traffic flashes their high beams at us. I’m nervous for the first time on the trip but also laughing a bit as well. I’ve read about this a million times in travel books and seen it on travel shows as well. Somehow…Usually anyway, it all works out.
And indeed, it is true. We are delivered safely and quickly back to our homestay, having had one of the best days of our trip so far.
Note: All photos (except those at the restaurant) copyright Daegan Lunsford. If you like his work you can find it on both 500.px and Instagram.