What a long day! I woke up at 3:45 AM this morning – one of those times where it’s so close to when you’re going to wake up anyway that you might as well get up.  So I started the coffee, did the last little bit of packing and got out the door.

Leaving at 5:00 AM has its advantages. The traffic is non-existent and cabs are easy to come by. And so, I was to the airport in no time. Thanks to finally having obtained a Nexus card, everything is so much faster. One hour after I got in the taxi cab, I was checked in, baggage dropped off, security and customs cleared and already ordering breakfast.

The flights themselves were, thankfully, uneventful. I dozed a bit but not as much as I would’ve liked.  Instead, I spent most of the flights reading Salman Rushdie’s The Golden House. So far, I’m about 1/3 of the way through and am really enjoying it. I love how he combines the fanciful with the real world. It made me especially happy to see Baba Yaga in it as Sage had just told her version of the Baba Yaga story – one with audience participation and partial improvisation – last night.

Atlanta passed in the blink of an eye and the nod of a head as I dozed between flights and then there I was in New Orleans.  I quickly gathered my bags and grabbed a car. Pretty much every time I go I end up with a Camaro. They like their cars big down here so I could have chosen a pickup truck, minivan or huge sedan or a small sports car. Since I only drive a few days a year it seemed best to get the small one. Lucky for me the small one was also the fun one.

Thanks to flying and a time zone it was now well past when my stomach was expecting lunch.  Fortunately, a quick search turned up a Vietnamese / Sushi place nearby that got decent reviews. Off I went.  Though it was incredibly busy – one person was host and waiter for about 10 tables and take-out, food came quickly. The seafood salad I ordered was incredibly good – more seafood than greens, which was a delightful surprise. 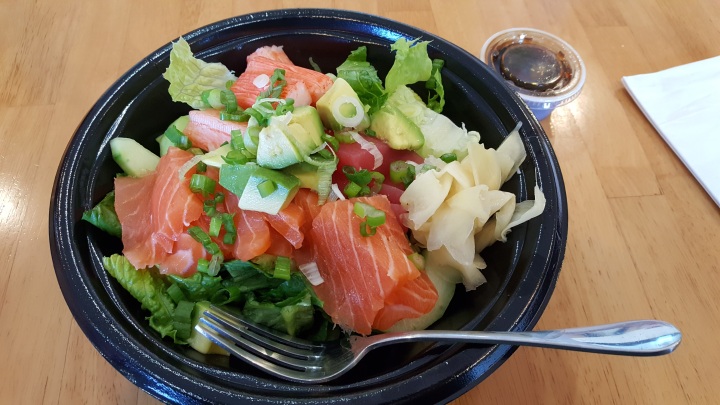 Off I went to Baton Rouge to go grocery shopping. I picked up fruit and nuts at Whole Foods and then headed across the street to Fresh Kitchen for lunches and dinners. These not only are more healthy options than what I tend to find in the restaurants, that also means I can spend more time online with Sage. Win/win!

After that it was back toward New Orleans again – but this time only about 20 minutes. I checked in to the hotel and settled in. As you can see, the view and weather’s a bit different from home. 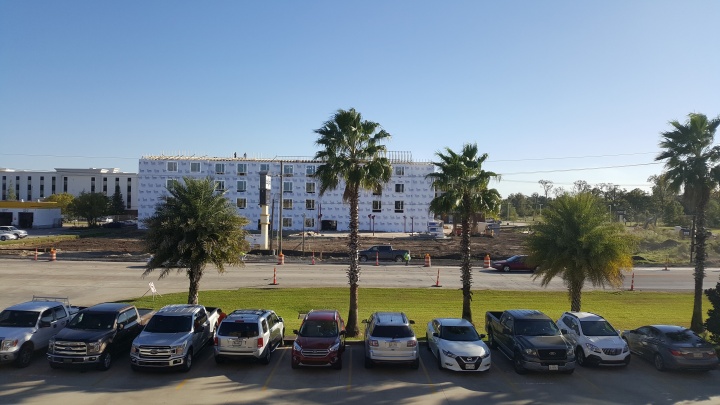 And yet another hotel is now under construction. A new one has been going up every few months here since I started coming down in 2014. The chemical plants nearby are bringing in a lot of business travelers and contractors!

After that I settled in to the room. Sage and I caught up on the latest episode of the Great British Bake Off – only one more episode left! I’m going to be sad to see it go. This shocks me as I truly expected the move to Channel Four to be a complete disaster but I actually like it better now. After that we watched a ridiculous MST3K episode before Sage headed off to bed.  I’m likely to read a bit now and do the same. Tomorrow the work begins! I won’t be talking much about that due to client confidentiality. But rest assured, I have some ideas for things to do this weekend that I can talk about. And I’ll mention when I’m running – I need to keep accountable. I plan to go tomorrow night and Saturday – pretty much every other day while I’m down here. 30 minutes to start…

3 thoughts on “Arrived Safe and Sound”